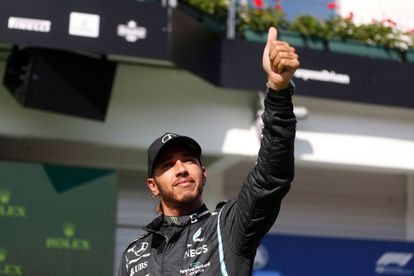 Mercedes’ Lewis Hamilton secured the 101st pole position of his career on Saturday as he went quickest in qualifying for Sunday’s Hungarian Grand Prix.

Hamilton will be joined on the front row by teammate Valtteri Bottas while championship leader Max Verstappen starting third alongside his Red Bull teammate Sergio Perez on the second row.

The seven-time world champion switched from medium to soft tyres for Q3 and produced a blistering lap of 1min 15.419sec, over three-tenths of a second faster than Bottas, who had also used the mediums.

Hamilton put the performance down to a team effort, thanking Bottas for his efforts to improve the package.

“It was an amazing qualifying lap and it has been amazing teamwork from everyone, Valtteri included, trying to push the car forward.

“The guys at the factory have left no stone unturned.

“The soft tyre is worth something like five metres into turn one. It was surprising to see everyone in the top 10 on the softs apart from us.”

Verstappen secured his 20th consecutive top three grid place but the World Driver’s Championship leader will want to make a strong start to the Hungarian Grand Prix, after he lead was slashed at Silverstone.