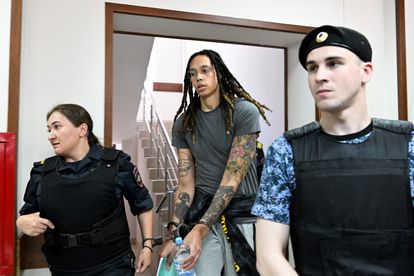 Lawyers for US basketball star Brittney Griner, who is standing trial in Russia on drug charges, said on Tuesday they hoped she would receive a “lenient” sentence.

Griner, a two-time Olympic basketball gold medallist and Women’s NBA champion who had played in Russia, was detained in February, just days before Moscow launched its offensive in Ukraine

She was charged with drug smuggling for possessing vape cartridges with cannabis oil.

She pleaded guilty and faces up to 10 years in a Russian prison.

The athlete, who is six-foot-nine (2.06 metres) tall, made a court appearance in the Moscow suburb of Khimki on Tuesday.

Brittney Griner will be cross-examined

Speaking to reporters, one of her lawyers, Alexander Boykov, said the 31-year-old basketball player would “probably” be cross-examined on Wednesday.

Her defence team expressed hope she would receive a lenient sentence, taking into account “a lot of extenuating circumstances”.

“We expect a rather lenient sentence,” Boykov said.

He stressed that even in the United States – where Brittney Griner had permission from a US doctor to use cannabis for medicinal reasons – the Women’s National Basketball Association (WNBA) star only used it “occasionally”, in order to relieve pain.

A medical expert working with the defence team, Mikhail Tetyushkin, told the court that medical marijuana – outlawed in Russia – was widely used in the world for medical purposes.

US Embassy Charge d’Affaires Elizabeth Rood, who attended the hearing, said her team had spoken to Griner, who confirmed she was “doing okay and as well as can be expected”.

Brittney Griner was detained when she came to Russia in February to play club basketball with UMMC Ekaterinburg during the US off-season – a common path for American stars seeking additional income.

Her high-profile case has become a new sticking point in relations between the United States and Russia, with Washington putting its special envoy in charge of hostages on the case.

US President Joe Biden has spoken to the star’s family, saying he will make it a “priority” to bring her home.