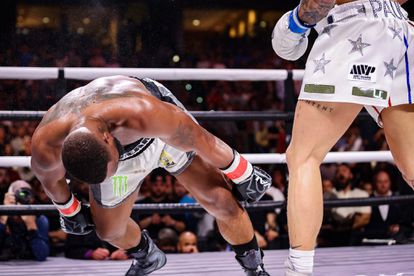 Social media star Jake Paul has followed through on his promise to finish his business in his rematch with former UFC champion Tyron Woodley. Photo: Twitter @ShowtimeBoxing

Social media star Jake Paul has followed through on his promise to finish his business in his rematch with former UFC champion Tyron Woodley. Photo: Twitter @ShowtimeBoxing

Jake Paul’s fifth foray into professional boxing created nothing but clinches and boos from the crowd in Saturday’s rematch with former UFC welterweight champion Tyron Woodley.

READ | DRICUS DU PLESSIS OUT OF UFC BOUT DUE TO INJURY

And then the YouTube star and social media influencer delivered the BOOM!

According to the CBSSports website, Paul (5-0, 4 KOs) feinted with a jab to the body and came over the top with a flush right hand to knock Woodley out cold and set off a wild celebration inside Amalie Arena in Tampa, Florida.

The contest saw the 24-year-old Jake Paul left the result in no doubt unlike back in August when he hung on for a split decision over Woodley in their first meeting.

The cruiserweight bout was contested at a catchweight of 192 pounds and survived a late opponent switch as Woodley, 39, filled in for the injured Tommy Fury, the half brother of heavyweight champion Tyson Fury, on less than two weeks’ notice.

Jake Paul was ahead on all 3 scorecards