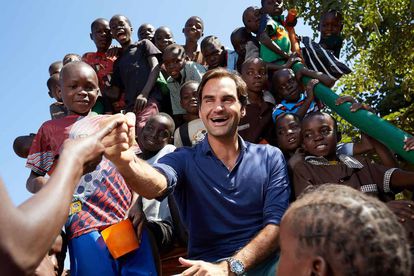 Roger Federer will donate R7.5 million through his foundation “to establish access to continued schooling for Ukrainian children.” Photo: Supplied

Roger Federer will donate R7.5 million through his foundation “to establish access to continued schooling for Ukrainian children.” Photo: Supplied

When they went on sale in early September, tickets for the Roger Federer vs Rafael Nadal tennis match were gone in just over 10 minutes.

For the original competition, the travel company had been offering a prize of two tickets to the game that will be held at Cape Town Stadium. This also included a two-night stay at a top waterfront hotel.

Their competition was scheduled to run until the 24th of January; with the winner set to be announced on Friday.

Set for the 7 February 2020 at 8pm, ‘The Match in Africa’ will mark the first time 20-time Grand Slam Champion Roger Federer plays his first-ever match in Sub-Saharan Africa.

The game against 18-time Grand Slam Champion and rival Rafael Nadal will be played to support children’s education in Africa. It’ll be the 6th edition of this fundraising event, but the first to be played in Africa. As a curtain raiser fans will be treated to a celebrity- pro doubles match between Roger Federer & Bill Gates vs Rafael Nadal and Trevor Noah.

In a press release from the Roger Federer Foundation, the tennis star shared the significance of the game. “This Match in Africa is a dream comes true,” said Federer.

“I will play in my mother’s home country against my toughest rival and friend Rafa Nadal. We share not only the love for tennis but also for the good cause of giving children a better start in education and in life. I feel privileged to have other leading philanthropists on board to entertain millions of people in the stadium and on TV. It will be a once-in-a lifetime moment for my family and I.”

Rafael Nadal also shared his excitement for the match and anticipation of getting to be a tourist in the Mother City. “Roger and I have shared so many magical moments on and off the court. Travelling with him to Cape Town and playing for the benefit of children is something I am very excited about. It will be my first time in the region with Roger as a tour guide – that will be fun.”