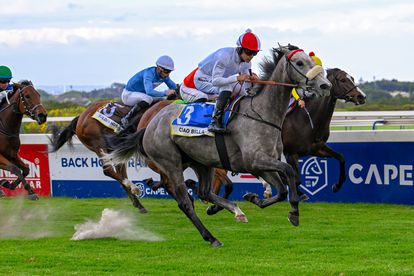 Gqeberha raider, the unbeaten Peach Daiquiri, impressive last out winner, Make it Snappy, the consistent, Who Do You Love and pace-pressing, Happy Chance have raced upfront or handy in the past so should ensure a solid gallop from the get go.

That may tee things up for a quality filly able to stalk the pace then accelerate sharply in the deep stretch with Ciao Bella fitting that profile.

The grey, by Gimmethegreenlight ex Bela Bela, dominated in the Western Cape Fillies Championships from a similarly favourable draw (3) when she blasted clear with a great turn of foot.

Jockey Richard Fourie was mightily impressed with that performance, so he sticks solid on this high-class Justin Snaith-trained filly.

Her pursuers on that occasion, Golden Hostess and Time Fo Orchids are again prejudiced by the draw, gated out at 12 and 13 respectively.

That is not insurmountable on the summer course with the 600m long run-in, but it makes their life harder.

Both were running on strongly in the Fillies Championship with Golden Hostess doing especially well to get as close as she did (1.35 lengths) given she was baulked in the straight.

Gimme’s Lassie comes out of that same form line and is another in with a shake as she was only a length and a quarter behind Ciao Bella, though it must be said that Snaith’s grey won under wraps.

Make it Snappy was cleverly placed by Brett Crawford off a light weight against Grade 1 performers, Chansonette and Marina last time. That was straight off a Maiden win and the fact that she sustained a good gallop and won start to finish makes her a threat, too.

There is little separating Bonika, Fun Zone, Echo of Life and Miss Marguerite on their past performances, and they could sneak into the frame. But they are light on the numbers needed to threaten for the win.

According to the latest Hollywoodbets odds, Ciao Bella is the 14/10 favourite, followed by Golden Hostess at 9/2, with Gimme’s Lassie and Make it Snappy both on offer at 8/1.

Ciao Bella boasts impressive figures so is the pick to win this prestigious Grade 1 for three-year-old fillies. Golden Hostess, Make it Snappy and Peach Daiquiri could follow her in.