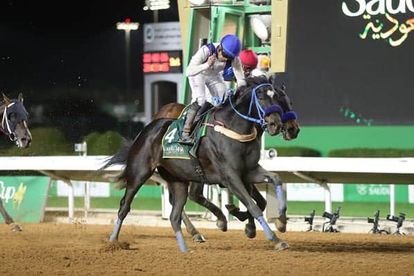 Saudi longshot Emblem Road came from behind to claim a shock win in the world’s richest horserace, the $20 million Saudi Cup, in Riyadh on Saturday.

The 66/1 outsider, ridden by 53-year-old Panamanian jockey Wigberto Ramos, stormed up the outside in the home straight to win a five-horse sprint by a head from US trainer Bob Baffert’s Country Grammer.

Emblem Road was the first Saudi winner of the race

Ramos and owner Prince Saud bin Salman Abdulaziz were jubilant afterwards as they were surrounded by fans celebrating the race’s first Saudi winner in its third edition.

The $10 million first prize capped a lavish meeting at the King Abdulaziz Racecourse dirt track where 240 horses from 16 countries competed for total prize money of $35.1 million.

READ | DURBAN JULY GETS A NEW SPONSOR IN HOLLYWOODBETS – AND A HUGE PRICE HIKE!