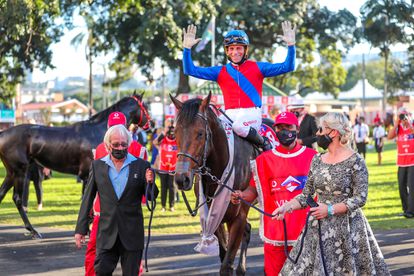 Approaching two veteran ‘captains’ of the industry to syndicate your champion for stud is akin to giving your son a kick-start and sending him to Oxford or Harvard!

According to the Sporting Post website, that’s surely the rationale behind leading owner Ashwin Reynolds’ move to syndicate ‘The People’s Champion’ Kommetdieding with the assistance of seasoned thoroughbred breeding professionals, John Freeman and John Koster.

The news that the modestly priced yearling, who has boosted horseracing’s man-in-the-street popularity ratings over the past few seasons through his outstanding performances on the track, will return to the place of his birth after the Grade 1 L’Ormarins King’s Plate and a swansong in the Grade 1 World Sports Betting Cape Met, has been received with excitement and anticipation.

The rags-to-riches story of the humble colt who went from obscurity to the unique Durban July/Cape Town Met double will go down in history as one of the great stories in South African racing folklore.

Racing folk fondly claimed him as ‘The People’s Champion’.

A modestly priced yearling, within three months he started maturing and grew into a magnificent looking colt.

His proud owner came up with a masterstroke of a name, which means ‘bring it on, we’re ready’.

He won on debut over 1 200m as a two year old and reeled off an undefeated sequence of four races at Hollywoodbets Kenilworth, culminating in a stunning victory in the Grade 3 Politician Stakes in January 2021.

The offers were in the millions, but the soft-hearted Reynolds declined them all, saying this colt was for South Africa.

In the process, the history books were updated as Ashwin Reynolds became the first racehorse owner of colour to win Africa’s most famous horserace.

Again the offers came, and this time even greater than before.

Reynolds was unyielding, opting to keep the colt in South Africa and instead to go for the 2022 Met in front of his adoring home crowd who had come to revere their favourite.

After an outstanding performance where he came from near last over a trip well short of his best in The Bantry Bay Stakes at Hollywoodbets Kenilworth on Saturday, trainer Michelle Rix said that she felt that for the first time in her champion’s career that his mental maturity has matched his physicality.

“He has always been an extremely laid back and gentle horse on and off the track. However, this season he has pushed himself to another level. While last year’s Cape season was spectacular, it is this year that I find myself extremely excited simply because of the vast mental improvement in the horse I’m working with!” she concluded.

What a terrific story for racing and of a horse that cost a mere R55 000 on the 2019 Klawervlei Farm Sale!