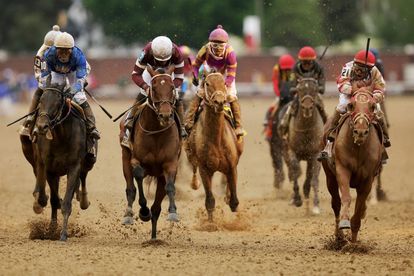 Rich Strike, who only got into the field the day before the race, stormed home to pull off a stunning upset in the 148th Kentucky Derby. Photo: AFP/Ezra Shaw/Getty Images

Rich Strike, who only got into the field the day before the race, stormed home to pull off a stunning upset in the 148th Kentucky Derby. Photo: AFP/Ezra Shaw/Getty Images

Rich Strike, an 80/1 longshot who only got into the field the day before the race, stormed home on the inside to seize a stunning upset victory in the 148th Kentucky Derby on Saturday.

The colt, trained by Eric Reed and ridden by Sonny Leon, gained a place in the field when Ethereal Road was scratched on Friday morning, as owner Richard Dawson put it, “about 30 seconds before the deadline” to enter.

Breaking out of the 20th post, Rich Strike was well back in the field of 20 as they turned for home, but Leon patiently guided him through the throng on the Churchill Downs dirt track.

Epicenter, sent off as the 4/1 favourite, was dueling with Zandon in the stretch when Rich Strike burst through on the rail for the greatest upset in terms of odds since 1913, when 91/1 longshot Donerail won the first event in US flat racing’s Triple Crown.

For Asmussen, it was his 24th Kentucky Derby start without a victory.

“I fell down in the paddock when he hit the wire,” said Reed, who like Leon was in the US classic for the first time.

“I about passed out!”

The chestnut colt’s only prior victory came at Churchill Downs in September.

But Dawson said that he wouldn’t have entered the horse if he didn’t think he had a chance.

“Never, ever would Eric and I put a horse in a race we didn’t think we could win,” he said.

“We just knew that we had a shot because every time he went longer he got better. Today he went a mile and a quarter and he just kept going.”

Indeed, the fired-up winner tried to take a bite out of his escort horse as they made their way to the winner’s circle to celebrate the victory, worth $1.86 million of the $3 million purse.

“I knew I had a horse for the race,” said Leon, who said he tried to keep the ride “nice and easy.”

“I waited for my moment and I came through on the stretch. The last 100 yards, I said, ‘I think I’ve got this race.'”

“It’s the reason everybody does this,” he said of the astonishing win.

“We’re not supposed to be here. But I knew this horse loved the track and he’d been training so good all year.”

Rich Strike became just the second horse to win the Kentucky Derby from the 20th post since the modern starting gate was introduced in 1930. The other was Big Brown in 2008.

The Triple Crown resumes in two weeks with the Preakness Stakes in Baltimore, Maryland, and Reed indicated that Rich Strike would be there.

The coveted treble, completed by just 13 horses, concludes in June with the Belmont States in New York – the race Reed said Rich Strike would have likely next been headed for had he not gotten into the Derby.

“He’s just getting good,” Reed said of the colt that was purchased from Calumet Farm for $30 000 last autumn after his breeder and former owner entered him in a low-level claiming race.

The astonishing finish unfolded before a full house under cloudy skies at Churchill Downs, after the number of spectators were limited in 2021 because of the coronavirus pandemic.

However, one longtime Derby mainstay was missing was six-time Derby-winning trainer Bob Baffert, who is serving the first year of a two year ban.

The Baffert-trained Medina Spirit won last year, but then tested positive for an anti-inflammatory not allowed on race day and was stripped of the victory.

Baffert has denied wrongdoing, and his influence was still felt as his former assistant Tim Yakteen saddled two runners who had previously been trained by Baffert: Taiba and Messier.

Taiba and Messier, who finished one-two in the Santa Anita Derby in California, received backing from bettors and went off as the second and third choices.

Matric results: When will they be out?

“Let’s soldier on”: L’vovo vows the good times have not ended [watch]

Savoury dumplings for your favourite stew or potjiekos