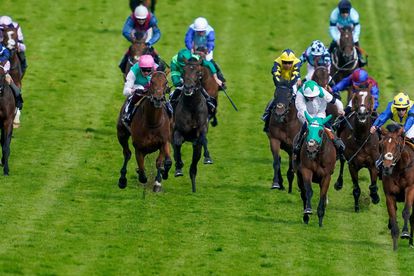 Hoo Ya Mal will continue preparations for the St Leger when he faces just 3 rivals in the William Hill March Stakes at Goodwood on Saturday. Photo: Getty Images

Hoo Ya Mal will continue preparations for the St Leger when he faces just 3 rivals in the William Hill March Stakes at Goodwood on Saturday. Photo: Getty Images

Cazoo Derby runner-up Hoo Ya Mal will put the finishing touches to his preparation for next month’s St Leger when he faces just three rivals in the William Hill March Stakes (3.00) at Goodwood on Saturday, 27 August.

According to the Racing Post’s Matt Rennie, the three-year-old, who is set to join Gai Waterhouse in Australia for a tilt at the Melbourne Cup having been bought for £1.2 million earlier this year, is as short as 8/1 for the St Leger and will step up to 1 mile and 6 furlongs for the first time in the Group 3 March Stakes.

The son of Territories was third in the Gordon Stakes on his latest start and has a prime opportunity to pick up just his second career win, with Animato, Perfect Alibi and Pink Fire Lilly his opposition.

Meanwhile, a small but select field of five will contest Goodwood’s feature, the £125 000 William Hill Celebration Mile (3.35), as Mutasaabeq goes in search of his first Group-race success.

The Charlie Hills-trained four-year-old was denied by Chindit in the Summer Mile at Ascot last time and heads the runners in the Group 2, which also include popular veteran Stormy Antarctic. Nine have been declared for the Group 3 Prestige Stakes (1.50).

At Beverley, Tis Marvellous will bid to become the third back-to-back winner of the Beverley Bullet Sprint (2.40) and will face 12 rivals in the Listed 5 furlong contest.

The eight-year-old will be reunited with last year’s winning jockey Paul Hanagan as he attempts to join an elite list, with Take Cover and Chookie Heiton the other dual winners of the race.

Weatherbys Super Sprint winner Eddie’s Boy goes in search of more lucrative glory in the inaugural running of the £100 000 Tattersalls Somerville Auction Stakes (2.45) at Newmarket, in which he heads a field of 18.

Also on the card, the popular Summerghand makes a quick return following his heroics at the Ebor meeting to defend his crown in the Hopeful Stakes (3.15), while at Windsor seven will contest its feature race of the year, the Group 3 Winter Hill Stakes (6.35).

In Ireland, 27 runners will contest the Paddy Power Irish Cambridgeshire (4.15) at the Curragh, which also features three Group 3s on its card.