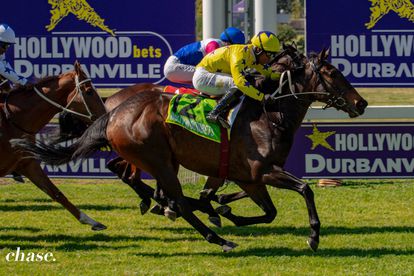 There was expectation aplenty ahead of Wednesday’s nine race meeting that heralded the start of the Hollywoodbets Spring Country series and the introduction of the RaceCape incentive, an innovative programme designed to boost the local equine population and field sizes.

Best day ever at Hollywoodbets Durbanville

In perfect Cape spring weather, attendance exceeded any recent meetings at the Northern Suburbs racecourse, with the environment taking on a fresh and welcoming purple ambience.

A Cape Racing official confirmed that lunch bookings outstripped any previous attendance, and the feedback was positive all around, with the Hollywoodbets team from the Cape and KwaZulu-Natal stamping their trademark hospitality, to convert the atmosphere.

“Fabulous,” was the short response from leading breeder Pippa Mickleburgh, who travelled from Stellenbosch to enjoy the launch day.

“Best day ever at Hollywoodbets Durbanville,” chirped a happy Justin Snaith, who saddled three winners, and warned punters that he has started later this year and that his maiden runners could be followed with confidence in the months ahead.

“This is what we have been crying out for. Thanks to everybody involved,” he added.

But the day belonged to Winning Form sponsored jockey, Keagan de Melo, who stated in an interview with the Sporting Post at the end of the last term that he was targeting the national title. He rode the first four winners before his stranglehold was broken by Louis Mxothwa, who booted Metar home to an exciting last-to-first post maiden victory in the fifth. Metar was a happy winner for birthday boy Brett Crawford and the Hollywood Syndicate, who will receive the KZN champion honours at the holiday province awards function this evening.

De Melo bounced right back in the sixth, to win on the well-backed Jasmine for Glen Kotzen.

The final race on the card provided a fitting finale when the Normandy owned and bred Beerenberg, up for sale on the BSA Online Sale, dead heated with Andre Nel charge Superior Leader. The result showed that everybody unnecessarily fussed about wide draws at Hollywoodbets Durbanville!

ALSO READ: Kenilworth and Durbanville can look forward to a brighter future with Hollywoodbets

World Cup 2022: Key players to look out for today

Phobia of the Day: Heliophobia