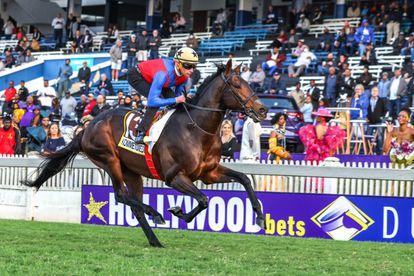 After Tuesday’s slick final field announcement at the Hollywoodbets Head Office in Umhlanga Rocks, there were plenty of accolades again for the spirit of commitment introduced by the new sponsors, who have brought their own unique purple spirit of innovation, organisation and passion to the event.

Invited guests, racing stakeholders and members of the public enjoyed a selection of premier coffees and pastries, as thirteen of the big race runners went through their paces in the mandatory gallops. East Coast Radio was broadcasting live from the Durban track as Hollywoodbets Dolphins players mingled with the happy crowd.

A closer look at the runners

The seven-year-old Do It Again, who bids for his place in history with a third victory in the race, galloped on his own under big-race rider Aldo Domeyer. The popular gelding looked in fighting trim and moved fluidly.

Vaughan Marshall’s 2021 runner-up Linebacker galloped with stablemate Look For Hounds. The son of Captain Of All was quite keen and has interestingly been carded with blinkers for the first time. The headgear was not fitted for the gallop.

Justin Snaith’s Hoedspruit is a big horse and he did nothing wrong as he stretched out on his own.

Dean Kannemeyer’s 3yo Waterberry Lane looked fit and happy and galloped with enthusiasm.

The Snaith’s ‘wild child’ Pomp And Power galloped with a stable companion after being accompanied by a beautiful white pony. The son of Vercingetorix is very capable, but his bad behaviour – he dug his heels in – and temperament flaws can only be exacerbated by the crowd on the big day. Justin Snaith looks to have some work to do on him.

Considered by many to have put in the best gallop of the morning, defending champion Kommetdieding looked in the pink of health and galloped with an air of authority. His post Highveld Season prep will be the only cause for concern.

After a scintillating low-flying third in the Gr1 Hollywoodbets Gold Challenge, the handsome Jet Dark looked well and caught the eye as he paced on his own. A horse with a presence, he looks like a massive runner if given a chance by Bernard Fayd’herbe to be within striking distance in the straight.

Gauteng raider Red Saxon was sweating up slightly and worked within himself with his companion. The son of Red Ray strode out well under history-making lady jockey Rachel Venniker.

Reserve runner Airways Law galloped on his own and looked well. He could be a serious contender for top honours in the ‘consolation’ race, the Gr3 Vodacom 2200.

The rest of the gallops were recorded, with recent arrival from the Cape, Belgarion, going through his paces at Summerveld.

Gauteng residents Puerto Manzano, Zapatillas, Second Base, Astrix, Flying Carpet and Nebraas were galloped on their home grounds. It was difficult to gain much insight from the clips.

Looking ahead, the Hollywoodbets Durban July Panel Discussion promises to be a top-quality preview.

Stay up-to-date on all the latest horse racing action by visiting the Hollywoodbets Blog page.

HOLLYWOOD SPORTSBOOK IS A LICENSED BETTING OPERATOR. HOLLYWOODBETS SUPPORTS RESPONSIBLE GAMBLING. NO PERSONS UNDER THE AGE OF 18 YEARS ARE PERMITTED TO GAMBLE. WINNERS KNOW WHEN TO STOP. SOUTH AFRICAN RESPONSIBLE GAMBLING FOUNDATION TOLL-FREE COUNSELLING LINE 0800 006 008 OR WHATSAPP HELP TO 076 675 0710.