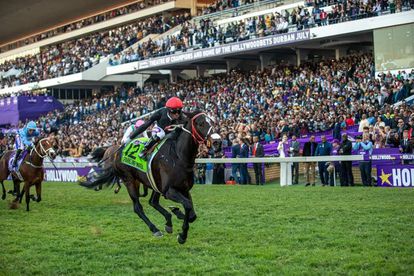 Mike de Kock saddled his fifth winner of the Hollywoodbets Durban July when Sparkling Water sprinted clear of her field at Hollywoodbets Greyville on Saturday.

This was also the third time the master trainer had won the race with a filly after Igugu and Ipi Tombe and the second time for S’Manga Khumalo who was the first black jockey to win the race on Heavy Metal back in 2013.

Sparkling Water challenged veteran galloper Do It Again approaching the 300m mark and drew off to win in commanding fashion.

Jet Dark rattled on from behind to snatch third along with Safe Passage with Do It Again relegated to fourth.

There was drama at the start as Do It Again dislodged his rider and had to be reloaded after a vet check.

Meanwhile, it was not an easy Hollywoodbets Durban July day for punters as hot favourite Captain’s Ransom failed to hit the boards in the Grade 1 Brentford FC Garden Province stakes.

The race fell to the Gareth van Zyl-trained She’s A Keeper who strode clear in the final exchanges to win as she liked from Marina, Under Your Spell and Captain’s Ransom.

The race was run at a pedestrian gallop and Richard Fourie was content to set towards the rear seemingly confident that the favourite’s turn of foot would carry her home.

It was not to be as she ran on well enough but the birds had flown and she could only manage a well-beaten fourth.

It was a red-letter day for Glen Kotzen as Ameena took the honours in the Grade 2 Zulu Kingdom Explorer Golden Slipper and stable companion Cousin Casey followed up in the Grade 2 Durban Golden Horseshoe.

The Golden Slipper looked to be a match between the two unbeaten fillies Maharanee and Sweet Pepper, but both were in trouble a long way out as Richard Fourie got Ameena to fire from off the pace and win going away from Woodland Retreat with Time For Orchids and Ride On filling the shallow end of the purse.

The Golden Horseshoe was something of a family affair with Glen Kotzen saddling the winner and his brother Nathan the runner-up Royal Victory. Cousin Casey is now unbeaten over 1 400m and rider Grant van Niekerk labelled him as a “very smart horse” after racing three wide in the early exchanges.