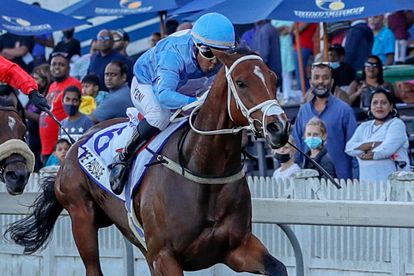 With less than four weeks to go until the running of the 2022 Grade 1 Hollywoodbets Durban July on Saturday, 2 July there has been significant movement in the ante-post betting.

This year’s race, to be contested over 2 200m at Hollywoodbets Greyville, has seen a number of key changes off-course changes.

Billed as Africa’s greatest horseracing event, it has taken on a new dimension of intrigue with the news earlier this year that the 2022 stake has been increased by 250% on 2021’s offering to R5 million, making it the continent’s richest stakes race.

READ | HOLLYWOODBETS DURBAN JULY: EVERYTHING YOU NEED TO KNOW!

In addition, Hollywoodbets will join Rothmans and Vodacom as only the third sponsor of the race in 59 years.

Hollywoodbets have set the pace by opening the ante-post betting for the big race which is now – at the time of publishing – just 27 days away.

The new race favourite is the Mike de Kock-trained Safe Passage who has seen his odds slashed to 33/10 thanks to his recent win in the Grade 1 Daily News 2000 at Hollywoodbets Greyville.

Justin Snaith’s Grade 1 Jonsson Workwear Cape Derby champion Pomp And Power can be backed at 6/1 with another De Kock runner, Sparkling Water, next best at 7/1.

Linebacker, from the Vaughan Marshall yard, is next best at 10/1 along with veteran Snaith star – and two-time Durban July winner – Do It Again.

Defending champion Kommetdieding, trained by the father-daughter duo of Harold Crawford and Michelle Rix, is listed at 25/2.

Another two horses follow at 14/1, namely Hoedspruit and Aragosta, while Jet Dark and Zapatillas can both be backed at 16/1.