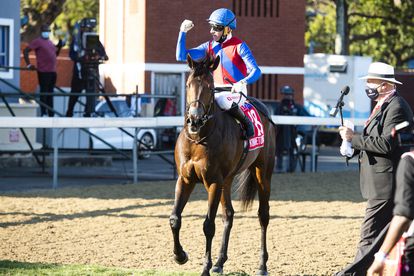 Will we have a repeat winner or a new name on the honours board of Durban July winners come Saturday, 2 July? Photo: Anthony Grote/
Gameplan Media

Will we have a repeat winner or a new name on the honours board of Durban July winners come Saturday, 2 July? Photo: Anthony Grote/
Gameplan Media

The updated ante-post betting ahead of the Grade 1 Hollywoodbets Durban July to be contested at Hollywoodbets Greyville on Saturday, 2 July has seen some changes.

Hollywoodbets have set the pace by opening the ante-post betting for the big race which is now just nine weeks away.

Linebacker, from the Vaughan Marshall yard, is next best at 10/1, followed by Mike de Kock’s Safe Passage who is now on offer at 25/2.

Justin Snaith’s Grade 1 Jonsson Workwear Cape Derby champion Pomp And Power is available at 14/1 in the betting along with Hoedspruit, Double Superlative and Sparkling Water.