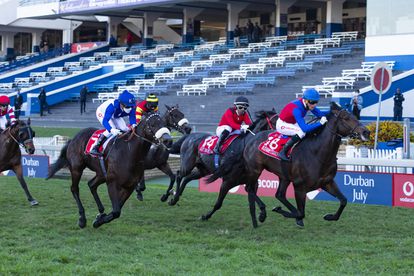 The latest ante-post betting for the Grade 1 Hollywoodbets Durban July to be contested at Hollywoodbets Greyville on Saturday, 2 July has seen some significant changes.

Hollywoodbets set the pace by opening the ante-post betting for the big race last month already.

Linebacker, from the Vaughan Marshall yard, is next best at 8/1, followed by Mike de Kock’s Safe Passage who is now on offer at 10/1 having previously been quoted at 25/2.

Justin Snaith’s recent Grade 1 Jonsson Workwear Cape Derby champion Pomp And Power is available at 14/1 in the betting along with Rain In Holland.

Jet Dark, Hoedspruit, Warrior and Red Saxon all follow at 20/1.