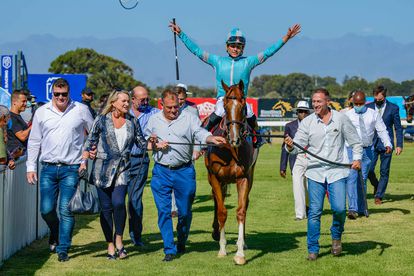 Justin Snaith’s Grade 1 Jonsson Workwear Cape Derby champion Pomp And Power has firmed into 14/1 in the ante-post betting for the Grade 1 Hollywoodbets Durban July to be contested at Hollywoodbets Greyville on Saturday, 2 July.

Hollywoodbets set the pace by opening the ante-post betting for the big race some weeks ago.

According to the Sporting Post website, after Saturday’s Kenilworth racecourse feature fireworks, there were some big movers!

Pomp And Power is in to 14/1, while heroic pacemaker and runner-up Universal is now available at 16/1.

Cape Guineas winner Double Superlative appeared to be flat after his big Cape Town Met showing when running fourth, and plodded into third place on Saturday.

While it is too early to write the handsome son of Twice Over off, he has drifted out to 16/1.

Cape Derby fourth-placer Senso Unico was running on steadily on Saturday, and may be worth considering at 66/1.

Kommetdieding remains at the top of the boards at 6/1 in defence of his title and it is worthwhile noting that his dedicated personal workrider Grant Behr mentioned that the son of Elusive Fort is even better now than he was when winning the Cape Town Met at the end of last month.

A lot will still change ahead of the Durban July

Linebacker, from the Vaughan Marshall yard, is next best at 8/1, followed by Mike de Kock’s Safe Passage who is on offer at 25/2.

Along with Universal and Double Superlative at 16/1 are Hoedspruit, Warrior and Sparkling Water.

Game on! Where and when to watch ‘The Last of Us’ in SA

Zwane hopes he gets same patience Pitso got at Sundowns