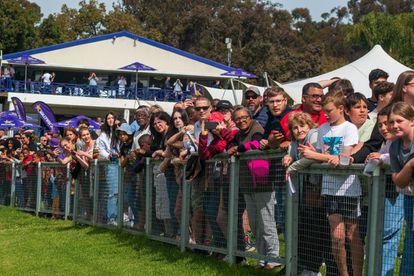 Heritage Day racing at Hollywoodbets Durbanville offered some thrilling action – and some controversy in the Hollywoodbets Settlers Trophy. Photo: Supplied

Heritage Day racing at Hollywoodbets Durbanville offered some thrilling action – and some controversy in the Hollywoodbets Settlers Trophy. Photo: Supplied

Though Han Solo dashed by from last place on the turn, (relishing the 2 000m distance he was trying for the first time) and passed the post a head in front, the Hollywoodbets Settlers Trophy was awarded to hard-ridden Snaith Racing entry Somerset Maugham after an objection for interference was upheld by the stipendiary stewards.

Contact was made on a couple of occasions as Han Solo shifted in approaching the line and with the margin of “victory” so narrow, officials felt justified in changing the result.

The trainer of Han Solo, Glen Kotzen accepted the reversal sportingly enough, but felt it was a tough beat as his entry had actually come from behind Somerset Maugham and gone by.

Adding to the controversial storyline, Richard Fourie was fined for excessive use of the crop on the horse who ironically benefitted from the boardroom decision.

All this unfolded after heavily backed favourite Baratheon got his leg hooked up in the stalls and was withdrawn at the start, in a dramatic Heritage Day headliner.

In stark contrast there was no controversial dispute nor stewards’ intervention required when Somerset Maugham’s full brother Charles Dickens romped to a wide margin victory in the concluding Graduation Plate over 1 250m.

Aldo Domeyer settled Candice Bass Robinson’s high-class charge a few lengths off the speed cut out by Tough Terrain, before moving up sweetly in the straight.

With Domeyer motionless, Charles Dickens sauntered into the lead at the 200m mark, leaving a toiling Iconic Destination (who is no slouch) in his wake.

“While I’m sitting, he just puts the race to bed,” glowed Domeyer afterwards.

Gareth Wright, who is now attached to Bass Racing and has twice ridden Charles Dickens at work, says, “He’s a bomb – just does it so easily.”

And the trainer was also fulsome in her praise of the chestnut son of Trippi.

“He is a lovely horse, so laid back and with a wonderful temperament. He has jet-like gears. We will be going for the Cape Guineas, using the Cape Classic as a steppingstone,” declared Bass Robinson, who will be trying to break a Bass family hoodoo of not ever having won the Cape Guineas.