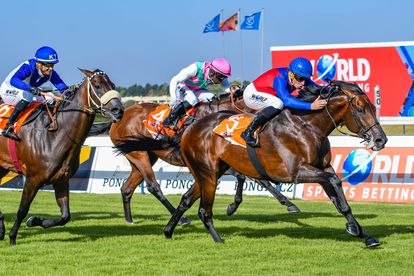 Kommetdieding fought on to land a famous victory in the Grade 1 World Sports Betting Cape Town Met over 2 000m at Kenilworth racecourse on Saturday, beating off the late rally of Jet Dark and outstaying the persistent threat of Linebacker.

The winner is a son of Elusive Fort, out of the Captain Al mare Adorable, and was bred at Klawervlei Stud.

His success, following on from a sensational victory in the 2021 Durban July, caps a stellar four-year-old campaign for the Harold Crawford/Michelle Rix trained champ.

Lockdown restrictions denied charismatic owner Ashwin Reynolds the pleasure of leading in his hero in Durban, but this time around he was on track with vociferous fans at Kenilworth to celebrate the moment.

He was gracious and fulsome in his praise in the post-race interview.

“Thank you to all Kommetdieding’s supporters and to Michelle Rix for training him and (her father) Harold for buying him.”

Rix has indeed handled her charge with aplomb – Kommetdieding is now a multiple Grade 1 winner with six wins from just 10 starts.

He overcame an interrupted prep due to a minor skin infection to come out cranked up for an outstanding Cape Town Met performance.

Jockey Gavin Lerena, super-professional as ever, walked the course the day before, found a perfect box seat position and delivered a strategic ride when the chips were down.

Kommetdieding, a popular winner with both the Cape public and professional punters convinced he was teed up to land a rare July/Met double, was heavily backed to start favourite at slightly better odds than 2/1.

Queen’s Plate winner, Jet Dark tried hard to make up the deficit, but his late rally fell short three quarters of a length shy at the wire.

Linebacker, who had moved up with intent before weakening late, was under a length back in third.

Sole three-year-old, Double Superlative got underway belatedly on the outer to snare fourth, 1.7 lengths off Kommetdieding in a rousing finish to this iconic Cape feature race.

Meanwhile, trainer Justin Snaith has previously described Captain’s Ransom as possessing “a sports car-type engine” and she produced a scything run from the back to win the Grade 1 Schweppes Majorca Stakes over 1 600m.

This Captain Al star filly has only twice been toppled in 11 career starts but with 400m to go it looked like she was in deep trouble and headed for a rare defeat.

Market rival, the three-year-old, Chansonette had swept into what looked a secure lead over a game, but tiring, Princess Calla.

Captain’s Ransom used her frightening finishing speed to dart through a gap on the stand-side rail to mug Chansonette in the final bound.

It was another precisely judged, world class ride by Richard Fourie as the field had hacked at a slow early pace and he gambled on settling her at the rear from a wide draw.

Fillies Guineas heroine, Chansonette suffered another heart-rending defeat as she was also narrowly pipped in the Grade 1 Paddock Stakes by the same nemesis, Captain’s Ransom.

A disconsolate, but sporting trainer Andre Nel confirmed that Chansonette will now be given a well-deserved break at a farm in George, after her tough and admirable summer campaign.

Punters were dealt a blow after the Grade 1 Pongracz Cape Flying Championships over 1 000m delivered a wacky result.

Rank 20/1 outsider, the Highveld raider, Bohica lead home a procession of 40/1 longshots, as S’Manga Khumalo gave him a perfect ride, just edging out a charging, Mr Cobbs and African Rain in a driving finish.

Trainer Adam Azzie’s initiative in schlepping down on the long road trip from Johannesburg was richly rewarded.

Connections had debated the decision over three days before committing to the extra costs and challenge.

“We’re pleased we took the chance – Bohica may be a bit in and out but on his best form we felt he could run close. S’Manga gave him a great ride, sticking to pacesetter Pleasedtomeetyou’s girth, coming off the bit late, then being so strong in the finish!” said Azzie.

Placed second previously in a Grade 1 (behind Rio Querari in the 2021 Computaform Sprint) this was his biggest win to date.

Not only thrilled connections, but also inspired bettors with a penchant for finding longshots, were celebrating afterwards.