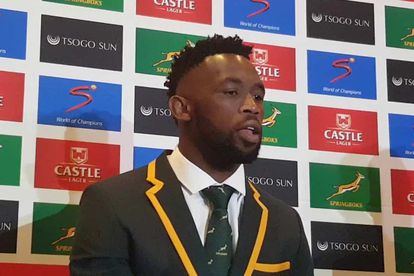 The result at the end might make it look like the Boks were in it throughout the game at Ellis Park on Saturday, but Siya Kolisi’s leadership credentials were put to an instant test as he had to lift his men up when England raced to a 21-point lead at the Highveld.

In what was a thrilling encounter, the home side clinched a deserved 42-39 victory, thanks to an inspired comeback in what was a historic occasion with South Africa being lead by a black African for the first time in an official Test.

However, the chips might have been down, as the visitors capitalised on some early jitters from the hosts, taking the score to 24-3 in their favour, and onewould have been forgiven for thinking the Boks were headed to another infamous thrashing… but it was no to be.

Speaking at a post-match media conference, Kolisi revealed how he, and some senior players, managed to calm the nerves and inspire the remarkable comeback staged by the men in green and gold.

“I was obviously very nervous, it was a tough start,” he said.

“Luckily I had guys like Duane (Vermeulen) who had been in situations like that before and Willie (Le Roux). We all took charge and told the guys to calm down.

“We knew that wasn’t what we were capable of.”

Coach, Rassie Erasmus started three debutants on the day, and they all managed to have a telling influence on the result, as S’busiso Nkosi dotted down twice, while his partner at the wing, Aphiwe Dyantyi managed a try of his own, as he latched on to a long pass from fellow debutant, RG Snyman, who was a menace in the lineouts.

The stand-out player was, however, little scrumhalf, Faf de Klerk, who was pretty much everywhere throughout the game and managed to have a hand in almost all of the home side’s tries.

Watch: Kolisi reveals what he said to the players in video below