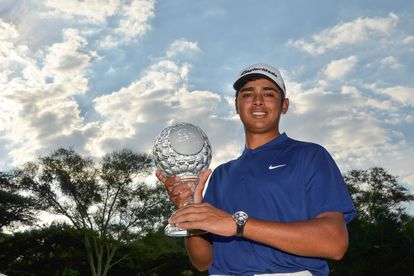 Glendower’s Yurav Premlall walked in the footsteps of giants when held on for a wire-to-wire win in the inaugural Nedbank Junior Challenge. Photo: GolfRSA

Glendower’s Yurav Premlall walked in the footsteps of giants when held on for a wire-to-wire win in the inaugural Nedbank Junior Challenge. Photo: GolfRSA

Glendower’s Yurav Premlall walked in the footsteps of giants when held on for a wire-to-wire win in the inaugural Nedbank Junior Challenge on a score of three-under-par at the Gary Player Country Club on Wednesday.

The 17-year-old GolfRSA National Squad member led by two strokes after the first round and carried a single shot lead into the final round, which soon became a two-horse race between Premlall and nearest challenger Jordan Duminy.

Duminy, the 2021 Boland Amateur champion and a fellow member of the National Squad, got off to a fast start and drew level with Premlall after seven holes.

“I was playing really solidly to begin with, hitting fairways and greens and not making too many mistakes,” said Yurav Premlall.

“Then came the blunder of a three-putt on the seventh hole. It threw the tournament wide open, because Jordy hit it to about three feet and tapped in for birdie.”

A blocked tee shot on the difficult eighth hole saw Duminy sign for an unfortunate double bogey and Premlall carried a two-shot lead into the closing nine.

Duminy trimmed the gap to one shot again with a birdie on the par-five 10th, but the Louis Oosthuizen Academy member made costly bogeys on 12 and 13 to hand the advantage back to Premlall.

As they reached the closing stretch, Premlall looked to have the tournament sewn up.

“I knew that, with a one-shot lead, pars on the last three holes would give me a great chance at winning,” he said.

“I really put a lot of effort into my iron shots and although I didn’t make the putts, it was good enough at the end.”

Reigning South African Amateur champion Christiaan Maas put in a late charge, firing birdies at the 16th and 17th holes, but his hat-trick birdie attempt on the closing hole rolled past and the GolfRSA No 1-ranked junior finished two back, tied with Duminy in second on 1-under.

Premlall, who is ranked third in the SAGA Junior Ranking – behind Maas and Duminy – was happy to make amends for his last outing at the Gary Player Country Club layout, where he missed the cut in the South African Open in December.

“To get the win at a golf course like this means so much,” said Yurav Premlall.

“In the SA Open I hit a couple of loose tee shots and paid the price, so it feels good to get a little bit of sweet revenge on the course.”

“I can’t wait to experience Africa’s Major’s from the other side of the ropes,” said the excited young champion.

“I don’t have all the details yet, but I’ll get to meet players, watch them on the driving range up close and I get to walk the golf course during the Pro-Am. It’s going to be epic.”

It has been some months since Yurav Premlall ended in the winner’s circle since his Harry Oppenheimer Trophy and Central Gauteng Open triumphs in November last year.

Although he won the ProShop Northern Amateur match play title, the teenager was delighted with his performance. He also sounded a warning that the best is yet to come from the new champion, who has been hard at work tightening up his swing and putting with his coach, Grant Veenstra.

“It’s a real confidence booster that I could get the job done in stroke play,” said Yurav Premlall.

“I had a couple of good results since the start of the season, but I just couldn’t pull it through. I’ve been making changes every week to my game so I’ve accepted that it’s going to be hot and cold.

“But I know that when it all comes together and I start to play consistently, it’s going to be a lot of fun.”

New GolfRSA National Squad member Daniel Bennett, who finished runner up in the Nomads SA Boys Under-19 Match Play Championship last week, finished alone in fourth on a score of 2-over par, with Hannes Strooh, who beat him in last week’s 36-hole final, finishing in fifth on 3-over.

Although the 16-year-old Klerksdorp junior struggled to navigate the typically tough final round course set-up, he was just five over for the day when he suffered a costly a triple on the par-4 15th. Sandys also dropped on 17, but still managed to seal a joint 16th finish on 13-over.

“This was an incredible experience; not just for me, but for the entire squad,” the North West junior said.

“We talked about last night at dinner. Everyone us will leave here having learned something from playing with these juniors. We especially liked watching the top guys. How they handle themselves, their course management and how they adjust their strategy when they get into trouble.

“This week was a massive learning curve, and we are leaving motivated to raise our games. We all want to be back here again next year.”

CMR Golf Club’s Rezario Adams was the next best in, tied for 31st on 18-over, and Alric Rooi from Theewaterskloof Golf Club finished 34th on his own, just a further stroke adrift.

Eskom’s entire board MUST GO – EFF