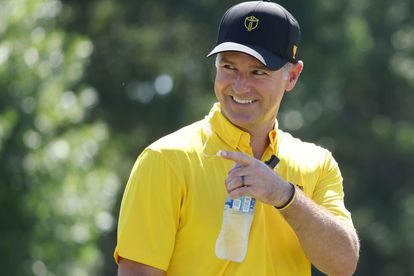 Defiant Internationals captain Trevor Immelman fired back on Sunday at those who laughed off his Presidents Cup squad. Photo: AFP

Defiant Internationals captain Trevor Immelman fired back on Sunday at those who laughed off his Presidents Cup squad. Photo: AFP

Defiant Internationals captain Trevor Immelman fired back on Sunday at those who laughed off his Presidents Cup squad after they pushed the heavily favoured Americans before losing for a ninth consecutive time.

“This team is no joke,” Immelman said.

“And we’ll fight ’til the end every single time.”

The Internationals, whose roster was decimated by the defection of several top stars to the Saudi-backed LIV Golf Series, which made them ineligible for the Cup, lost 17.5-12.5 to the United States at Quail Hollow.

The Americans own a 12-1-1 edge in the all-time rivalry, having never lost on home soil, but Immelman vows his team’s day is coming.

“We’re going to win this event,” he said.

“We’re here for the long run in this event. So we’ll keep building. We’ll keep fighting. At some point, we’re going to win.”

The Americans went 6.5-5.5 in the 12 concluding singles matches, but each was tight deep into the back nine as the youngest-ever global squad tested a mighty US lineup with 10 of the world’s 16 top-ranked golfers.

‘Thought we had a chance’ – Trevor Immelman

“At some point this afternoon, I thought there was still a chance,” Immelman said.

“When you consider that we were 8-2 down on Friday evening, this team is no joke, and I’m sick and tired of it being spoken of as a joke.

“We love this event, we love our team and we cannot wait to run this back and have another shot.”

“When I was made captain, there was no such thing as a pandemic,” said Immelman, who then appeared to take a subtle swipe at LIV Golf, adding, “There were a few other things that weren’t around as well. And so we’ve had a lot of hurdles to get to this point.”

Immelman focused on the players he had, however, and the result was a bonding experience for young talent that could form a team core for years to come.

“All of us experienced something we haven’t quite experienced at this point unless we’ve been in contention in a major,” Australian Cam Davis said.

“This is just a massive stepping stone in learning about yourself.

“This was awesome. We all want to be a part of this in the future because this was probably one of the most enjoyable experiences of our lives. It has been unreal.”

“All of us are so much closer, so much better friends after this week. Most of us have learned a lot this week,” said South African Christiaan Bezuidenhout.

Australian Adam Scott, the 2013 Masters champion, made his 10th start and still hasn’t won the Cup. But the 42-year-old feels something building.

‘A cup is coming our way’

“It still hurts not to win,” he said.

“The big difference I felt the last couple years is what’s going on in our team room… good things are really starting to happen in that environment.

“Once some of these players start playing on a few more teams, that bond forms over years, I think we’re not going to leave here disappointed.

“A Cup is coming our way soon.”

The Internationals are building a behind-the-scenes brain trust core of captains the way the Americans did after a Ryder Cup loss at Gleneagles in 2014.

“We have a system that we like and a plan and a strategy,” Trevor Immelman said.

“This was an important week for us just to just lay a couple more bricks in this house we’re trying to build.

“The bonds we formed this week were so good. These friendships are forever.”

Immelman called his team “warriors” and spoke of his pride in them, saying they achieved almost every goal he had for the group.

“We checked off all of them except leaving here with the trophy,” he said.