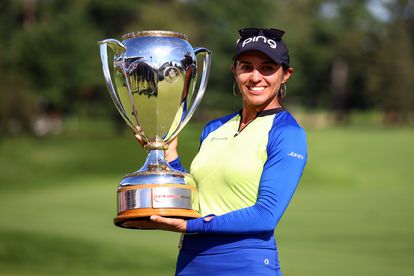 South Africa’s Paula Reto won the first title of her LPGA career on Sunday, holding on down the stretch to win the Canadian Women’s Open. Photo: Vaughn Ridley/Getty Images

South Africa’s Paula Reto won the first title of her LPGA career on Sunday, holding on down the stretch to win the Canadian Women’s Open. Photo: Vaughn Ridley/Getty Images

South Africa’s Paula Reto captured the first title of her nine-year LPGA career on Sunday, holding on down the stretch to win the Canadian Women’s Open by one stroke.

The 32-year-old from Cape Town made five birdies on the front nine on her way to firing a four-under-par 67 and finishing on 19-under 265 for 72 holes at Ottawa Hunt and Golf Club.

Reto ended her drought in her 157th career LPGA start.

“I’m really happy and it has been such a long time. I was like, ‘I hope one day I will win,’ and it came true. I’m really so excited.”

Reto, who fired a course-record 62 on Thursday, only won her first pro title in February on the Sunshine Tour in her homeland.

Third-ranked American Nelly Korda, who would have taken the number one spot with a victory, also shot 67 to share second with South Korea’s Choi Hye-jin on 266.

New Zealand’s Lydia Ko closed with four consecutive birdies to shoot 63 and finish fourth on 267 with South Korea’s An Na-rin fifth on 268.

LPGA rookies Choi and An shared the 54-hole lead but Choi began with 14 pars and shot 69 while An fell back with a double bogey at the seventh and a triple bogey at the par-5 eighth on her way to firing a 72.

Clinging to a one-stroke lead, Reto went over the green at the par-3 17th but chipped the ball inches from the cup and tapped in for par to stay in front heading to the par-5 18th.

Reto sent her approach into the right rough on a slope, then punched out to 15 feet from the hole.

Choi then came up short on a long eagle putt over a ridge that would have given her a share of the lead, instead settling for her ninth top-10 effort of the season.

Reto lipped out on her birdie putt then tapped in for the victory.

“I was so nervous coming to the last hole,” Paula Reto said.

“I kind of hit a bad 3-wood and that rough shot over there kind of saved me. I was just committing to it, trying to keep it simple.”

Reto began one stroke off the pace but charged quickly with an opening birdie and a chip to inches from the cup to set up a birdie at the third.

Korda, the Tokyo Olympic champion, had charged into second place with a birdie at 11 and an eagle at the 12th. She answered a bogey at 14 with a birdies at 15 and 16 while Reto took a bogey at the 14th, trimming her lead to one stroke to set up the closing drama.

Leading scores after Sunday’s final round of the LPGA Canadian Women’s Open at Ottawa Hunt and Golf Club (par-71, USA unless noted):