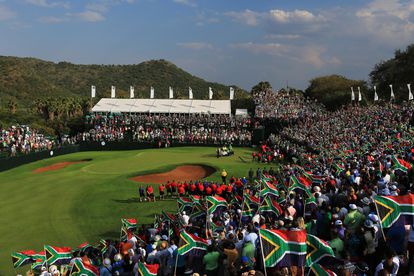 The Nedbank Golf Challenge this year celebrates its 40th anniversary as an iconic tournament which since 1981 has captivated the golf world. Photo: Supplied

The Nedbank Golf Challenge this year celebrates its 40th anniversary as an iconic tournament which since 1981 has captivated the golf world. Photo: Supplied

The Nedbank Golf Challenge this year celebrates its 40th anniversary as an iconic tournament which since 1981 has captivated the golf world with its mix of the greatest stars in the history of the game, an outstanding golf course, and an unrivalled entertainment offering.

READ | LIV GOLF INVITATIONAL SERIES: HOW MUCH ALL 6 SOUTH AFRICANS WON IN BEDMINSTER

The celebrations for this year’s Nedbank Golf Challenge, to be played at the Gary Player Country Club at Sun City from November 10-13, will seek to capture the incredible history of a tournament that changed world golf’s landscape on its rise to becoming a leading DP World Tour event and which has earned it the title of “Africa’s Major”.

Upon its debut in 1981, the Nedbank Golf Challenge was described by the world’s sports media as “the golfing coup of the century” as it offered golf’s first million-dollar purse to be contested by five of the world’s leading players in Jack Nicklaus, Gary Player, Seve Ballesteros, Lee Trevino and Johnny Miller.

Miller was crowned the inaugural champion following a playoff with a young Seve Ballesteros, and against the backdrop of the bold entertainment offering of the new Sun City resort, the championship Gary Player Country Club designed by Player, and a glittering array of celebrities including Sean Connery, Telly Savalas and James Hunt who made this the social occasion the tournament has remained.

Nedbank Golf Challenge has evolved over the years

Over the next decades, the Nedbank Golf Challenge would continue to evolve in every facet from its prize money to the size of its field, while always remaining at the forefront of tournament golf and attracting stars of the game from Jack Nicklaus to Tiger Woods as well as an array of Major champions, world number ones, and Ryder Cup and Presidents Cup stars.

The field grew from its initial five players to 10 and then later the 12 that it had for most of its history before expanding to its current field of 64 players.

The Nedbank Golf Challenge has straddled the greatest eras in golf, from the dominance of Jack Nicklaus, Arnold Palmer, Gary Player and Tom Watson to the emergence of Tiger Woods, Rory McIlroy and the new generation of stars.

The Nedbank Golf Challenge has entrenched its status as one of the greatest tournaments in world golf and the 40th playing of “Africa’s Major” will add to this incredible legacy.