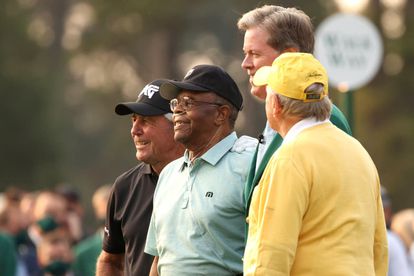 Lee Elder, the first black player to qualify for the Masters, has died at the age of 87, the PGA Tour has confirmed. Photo: Getty Images

Lee Elder, the first black player to qualify for the Masters, has died at the age of 87, the PGA Tour has confirmed. Photo: Getty Images

Trailblazing golfer Lee Elder, the first black player to qualify for the Masters, has died, the PGA Tour announced on Monday.

Elder, who battled racism throughout his career, made history when he earned a place in the 1975 Masters.

The racial barrier-breaking golfer, who was chosen as the ceremonial starter for this year’s Masters, was one of the first black professionals to play on the tour after the PGA lifted its ban on non-white players in 1961.

He qualified for the PGA Tour for the first time in 1968, and won his first tournament in 1974 at the Monsanto Open in Florida – ensuring him a place in the Masters the following year.

“In 1975, the strongest memory as I recall was how nervous I was going to the first tee,” Elder recalled earlier this year.

“I had a wonderful round that day. Every tee and every green I walked on I got tremendous ovations. Having something like that helped settle you down. I was able to stick with business.”

Elder posted a 74 and a 78 in his historic Masters appearance, missing the cut.

However his road to the tournament had been turbulent, with Elder goinreceiving death threats warning him not to play in Georgia.

“It was frightening. You try to eliminate the possibility of anything happening,” Elder said in an interview with CNN, revealing that the hostile reaction to his qualification left him mulling whether or not to play Augusta.

“I did consider not going. It was on my mind and I think the reason why I had thought about it was because it had been so difficult qualifying for the Masters.”

Eventually Elder said he decided to play because “it was something that I had wanted ever since I came on the Tour.”

“I think the reason why there had been so much talk about no Black man playing at Augusta and after all that, I wasn’t going to qualify and not go.”

However Elder took precautions during the tournament, even renting two houses during the week of the event to keep his whereabouts a secret.

“The logic behind that was the fact we did not want the people to know where I was staying,” he said.

Elder, who won four tournaments on the PGA Tour, would eventually go on to play in the Masters five times, with his best finish coming in 1979 when he tied for 17th.

This project has transformed education in remote Eastern Cape

TAC slams Mbeki over his views on HIV