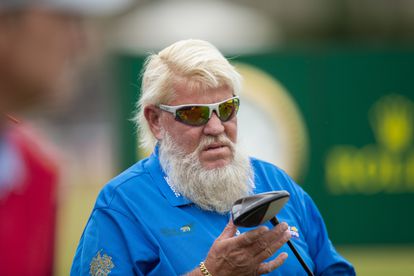 John Daly has called for Turnberry to be put back on the tournament rotation in a show of support for former US president Donald Trump. Photo: EPA/ROBERT PERRY

John Daly has called for Turnberry to be put back on the tournament rotation in a show of support for former US president Donald Trump. Photo: EPA/ROBERT PERRY

Outspoken 1995 Open Championship winner John Daly called for Turnberry to be put back on the tournament rotation on Thursday, in a show of support for former US president Donald Trump.

The Scottish course, which was bought by Trump in 2014, was taken off the rotation in the wake of the storming of the US Capitol by Trump supporters in January 2021.

John Daly shot 73 in Round 1 at St Andrews

Turnberry last hosted the Open Championship in 2012 and tournament organisers the R&A said it will not return until “the focus will be on the championship” rather than the course’s proprietor.

John Daly, who won the Open at St Andrews in 1995, is back at the home of golf this week thanks to his exemption as a former champion.

“I know they don’t want to go back, but it would be great to see Turnberry again on the rotation,” Daly said after carding a 1-over par round on Thursday.

“What daddy Trump has done to that place, I heard is amazing.”

The 56-year-old has caught the eye in St Andrews with his typically eccentric dress sense and was even seen puffing on a cigarette during his practice rounds.

The pair have been sponsored by American restaurant chain “Hooters” with their bright orange branding plastered across Daly’s golf bag.

“Being here, the fans for all these years have been just awesome.”

Daly, who these days sports a beard that would be the envy of every wannabe Santa Claus around the world, posted a respectable opening round of 1-over par 73 after carding six bogeys and five birdies.