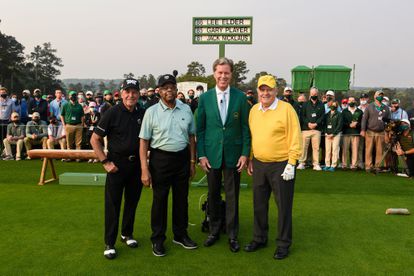 Wayne Player, son of South African golfing great Gary Player, has been “banned” from future Masters for using last Thursday’s opening ceremony as an opportunity to promote golf balls, according to Yahoo! Sports.

Last Thursday’s opening ceremony centred around Lee Elder, the first back man to play in the Masters.

Elder, now 86, played in the 1975 Masters, and was honoured on the first tee when Gary Player, a three-time winner of the Masters, joined six-time green jacket winner Jack Nicklaus to get the tournament under way.

However, while Elder was receiving the applause of the patrons in attendance at Augusta National, Wayne Player, who was serving as his father’s “caddy” for the opening tee shots, stood behind Elder holding a sleeve of OnCore golf balls in such a way as to give the logo maximum visibility and exposure.

The issue wasn’t the appearance of the logos themselves, but the brazen and obvious nature of the move.

OnCore CEO Keith Blakely said in a statement that the company “did not ask or instruct Mr. Player to have our ball sleeve visible during the ceremony and are sorry if his actions caused any offence or was a distraction from the wonderful recognition being paid to Mr. Elder.”

Wayne Player, who owns a stake in OnCore, subsequently told Golf Digest there was “zero intent” to upstage Elder’s ceremony.

“The only thought from that point was that it would be cool for fans to know what ball my dad was teeing off with,” Wayne Player claimed.

“That’s where it ends. If I’ve hurt people’s feelings then I’m truly sorry and hope they will forgive me.”

OnCore are one of Gary Player’s numerous sponsors.

In 2018 during the Masters he was arrested on fraud charges.