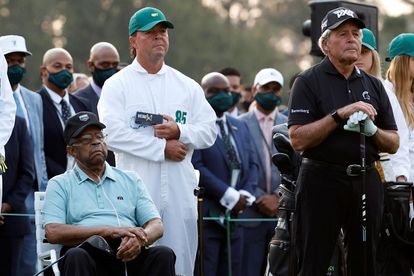 Gary Player’s son Wayne Player has revealed he received a lifetime ban from the Masters after his controversial marketing stunt at last year’s tournament.

Wayne was ‘caddying’ for his father as the now 86-year-old legend hit ceremonial opening tee shots at Augusta alongside Jack Nicklaus and Will Elder, who was making his debut as honorary starter in recognition of being the first African-American competitor to play in the Masters.

Elder was too ill to hit a tee shot himself but gave a speech to the gallery.

However, prior to the hitting of the tee shots, Wayne Player posed alongside the honorary starters and held up a sleeve of balls in clear view of the cameras to advertise the brand.

In a recent interview with Golf Digest, Player, 58, admitted the stunt was “tacky” and has resulted in a lifetime ban from the tournament.

“It wasn’t premeditated, but it was a tacky thing.

“They say there’s no such thing as bad publicity – I found out that that’s not quite true,” he added.

“I don’t mind letting people know. To be completely transparent I think it is a cool story because you know, the National never really came out formally and said, ‘Oh, we’re, you know, not allowing Wayne Player to come back to the Masters.’ They never ever said that to the media. That’s just the way they do it. They don’t say much.”

Player said he sent a written letter of apology to Augusta National, but they were unmoved in their letter of response.

“It said thanks but no thanks. It said, you know, we appreciate you reaching out and apologizing, we accept your apology, but we are not changing our position, we are not going to allow you back. You ruined a special moment in the history of the game of golf.”

Wayne Player accepts he was at fault for his actions.

“I understand why people took offense to it,” he said.

“Jack, the Golden Bear himself, told me, ‘What are you thinking?’ I said, ‘You know, Jack, you’re right.’ You have to be accountable when you mess up.”

Player also said he called Lee Elder and apologised for causing any offence.

“I’ve got Lee’s cellphone number. I called and I said, ‘You know, Lee, I love you guys.’ You know, everyone said I was disrespectful for a special moment in time for Elder. I said I was sorry, and I didn’t mean to take up his special time. And he said, ‘Wayne, you know how much I love you. Right?’ It didn’t cross his mind. That’s important for people to know.”

As for what his famous father made of the affair, Player said he did not get involved.

“He stayed out of it. He’s caught in the middle and doesn’t want to take sides.”