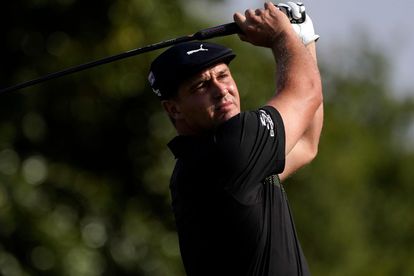 Ball-blasting Bryson DeChambeau’s incredible 417-yard monster shortcut drive to set up a pivotal eagle on Friday quickly became the talk of the opening day of the Ryder Cup.

The 28-year-old American, known best for his electrifying long drives and desire to take direct lines no matter the consequences, delivered an epic tee shot at the dogleg par-5 fifth hole at Whistling Straits, playing at 581 yards.

READ | ‘I’LL GET A TATTOO IF WE WIN THE RYDER CUP’, PROMISES PADRAIG HARRINGTON

“I knew if it was a little downwind, I could take a unique line and I luckily was able to have that wind today,” DeChambeau said.

In perfect position, Bryson DeChambeau dropped his approach four feet from the cup and rolled in his eagle putt to win the hole and level the match. The Europeans never led again.

WATCH | THIS LEOPARD DID NOT LIKE THE TEE SET-UP AT SKUKUZA GOLF CLUB!

“I’m glad I got something for the team,” DeChambeau said of the draw in a match neither duo led by more than 1-up.

“Frustrating, but we fought hard. It was a hard-fought fight to the end.

“We definitely had the upper hand. We had a lot more opportunities to do things and just didn’t take advantage of those.”

Scheffler, a Ryder Cup rookie, marveled at his chance to see his partner’s tremendous shot up close.

“That was probably the most excited he’s ever been on a golf course was on number five,” Scheffler said.

“That wind, we had it on one of our practice days and we figured out what he needed to do, so to have an opportunity to do that in competition was amazing. I was jacked up for him as well.”

Scheffler was stunned DeChambeau could commit a full-powered blast to such a shot given where he was aiming.

“I think he pushed it a little bit, but he smashed it, so thankfully he pushed it just a touch,” Scheffler said.

The shot inspired the US pair in their fight to the finish with the world number one.

“It was great. That was a good spark for us and good momentum for the rest of the day,” Scheffler said.

“My body is finally starting to get comfortable and heal from all the speed training stuff,” he said.

“Felt good going out there today, almost too good where it was a little loose. I got a little more into my comfort zone after I made eagle.

“I didn’t want to make par because if I did I would be walking home.”

DeChambeau helped the Americans seize a 6-2 edge, their largest first-day lead since 1975.

“They fought hard every single shot out there from what I saw.

“This is a great start but the job’s not over. We have two more days. A lot more golf. And we cannot lose our mindset to win.”