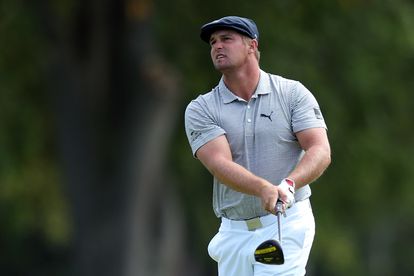 Bryson DeChambeau fired two eagles in a spectacular 12-under par 60 and a one-shot lead over Jon Rahm and Patrick Cantlay as darkness halted the BMW Championship second round.

The long-hitting American’s power was on full display on the 7,542-yard Caves Valley Golf Club course in suburban Baltimore, Maryland.

Bryson DeChambeau had a six-foot birdie putt at the 18th that would have given him just the 13th sub-60 round in PGA Tour history, but he couldn’t get it to drop.

The world number six, who won his first major title at the US Open last year, hit just seven of 14 fairways in regulation, but he split the fairway at 18, where his approach sailed over the pin and spun back to six feet.

Until that birdie miss DeChambeau had made all 16 of his putts from within 12 1/2 feet.

“I misread the putt, so, one of those things,” DeChambeau said.

“It was an awesome opportunity.

“I had a couple shots, a couple birdie opportunities at 17 and 18, and didn’t happen but still really proud of the way I handled myself, and it’s great to feel some pressure again which is awesome.”

Despite the dazzling display, DeChambeau’s 16-under par total of 128 put him just one stroke in front of his nearest rival in the clubhouse Patrick Cantlay, who had 10 birdies and a bogey in a nine-under-par 63 for 129.

Cantlay was tied for the lead after his 10th birdie of the day at the 16th, but was in a greenside bunker at the par-three 17th and couldn’t get up and down for par.

He eagled the fourth, where his 273-yard second shot left him an 11-footer. With birdies at five, seven and eight – where he rolled in a 30-foot putt – DeChambeau was seven-under for the round heading into the back nine.

Birdies at 11, 12  and 14 had him neck-and-neck with Cantlay before another impressive eagle at 16 – where he hit his second shot from trampled dirt near a cart path 252 yards to three feet.

“One of the better ones of my career,” he said of his second shot at 16.

“We judged the flier perfectly.

“A lot of putts went in,” he added of the round as a whole.

“A lot of things went right.

“We got a lot of great numbers out of the rough today, and I played my butt off and never thought too much about anything until the last few holes.”

Both Bryson DeChambeau and Cantlay were in the clubhouse before a two-hour weather delay because of lightning in the area.

Rahm, the overnight co-leader with Sam Burns and Rory McIlroy, came back from the delay with a nine-foot eagle putt at the 12th that moved him to five-under for the round and 13-under four the tournament.

The Spaniard drained 29-foot birdie putts at both the 13th and 15th to move within one stroke of the lead before play was suspended. The round was scheduled to resume on Saturday morning.