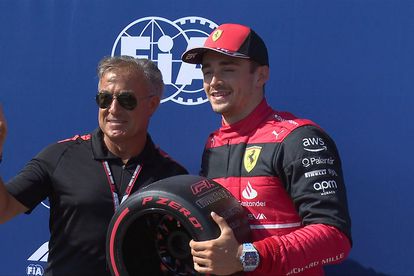 Championship leader Max Verstappen finished second in Q1 behind Leclerc, while Carlos Sainz, who will start at the rear due to engine penalties, was fastest in Q2 with an impressive performance.

With Sainz unable to do anything to improve is own lot, he gave Leclerc a pair of tows in Q3 which helped him take pole position.

For McLaren, Lando Norris was able to split the Mercedes in P5 while moving George Russell to P6.

Sainz gave up his Q3 to win P9 for Ferrari, but Kevin Magnussen, who qualified for Q3 but didn’t participate in the session, will start at the back due to engine penalties.

Esteban Ocon qualified P12 on the road for Alpine at home, while Daniel Ricciardo qualified P11 and missed Q3 by less than a tenth of a second. In qualifying, Valtteri Bottas placed 13th, placing Alex Albon of Williams in 15th and Sebastian Vettel of Aston Martin in 14th.

Pierre Gasly and Lance Stroll (16th and 17th, respectively) missed out on Q2 by 0.06s, while oversteer for Zhou Guanyu saw him finish 18th for Alfa Romeo. Mick Schumacher’s brief encroachment of track limits dropped him down to 19th and out of Q1, while Nicholas Latifi was 20th.

With penalties for Sainz and Magnussen, of course, those eliminated in Q2 and Q3 will see a bump up the grid for Sunday’s race.

Naturally, those who were eliminated in Q2 and Q3 will move up the grid for Sunday’s race due to penalties for Sainz and Magnussen.

Note – Sainz and Magnussen required to start race from the back of the grid for use of additional power unit elements. Schumacher’s fastest Q1 time of 1:33.114 was deleted for a track limits infringement.

Another Ramaphosa detractor in the ANC calls for his resignation

Will Ramaphosa resign? Here is what he has told his inner circle