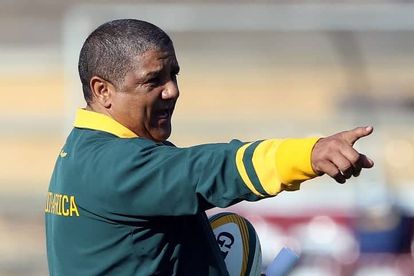 Springbok coach Allister Coetzee has included the uncapped quartet of Andries Coetzee , Raymond Rhule , Courtnall Skosan and Ross Cronje in his starting team for Saturday’s first Test in the incoming series against France at Loftus Versfeld in Pretoria, while a fifth uncapped player, Dillyn Leyds, is on the bench.

No 8 Warren Whiteley will become the 58th Springbok captain when he leads the Boks onto the field on Saturday and Cronje will become South Africa’s 50th Test scrumhalf on Saturday.

Also in the match-day squad is the experienced and versatile Frans Steyn, the 2007 Rugby World Cup winning centre, who is back in the Springbok squad for what will be his first Test for South Africa since September 2012, when he played against the All Blacks in Dunedin. He last played a match for the Boks in 2014, against the World XV in Cape Town.

The new-look Springbok match-23 has only seven survivors from the team that played against Wales at the end of last November – four of those players are starting on Saturday, namely Whiteley, Elton Jantjies, Franco Mostert and Tendai Mtawarira, while Pieter-Steph du Toit, Bongi Mbonambi and Steven Kitshoff also played in Cardiff.

Coetzee has opted for combinations in key positions, with Jantjies playing alongside his Lions team-mate Cronje, the Bulls’ Jan Serfontein and Jesse Kriel in the midfield and the Johannesburg-duo of Andries Coetzee and Skosan in the back trio, where they will be joined by Rhule, who will earn his first start although he was previously a member of the Springbok touring squad.

“We have gone for settled combinations and selected players for the starting fifteen who have trained well with us,” explained Coetzee.

“They are in good form so far this season and they will be battle-ready. It is a great opportunity for our uncapped players to cement their places in the team.”

Coetzee also pointed to this week’s good preparations in Pretoria, despite the injury setbacks which ruled out the trio of Duane Vermeulen, Damian De Allende and Lionel Mapoe, who is in his final phase of rehabilitation.

“Duane is a world-class player and it’s a real pity he is out injured. However, I believe he needs rest after a long and very hard season in Europe. He has a few niggles and I am sure the time off will do him the world of good,” said Coetzee.

“I am excited about our loose trio combination. Siya Kolisi has played at openside for the Springboks and the Stormers and I know he will be able to do the job for us. Oupa Mohoje has good ball carrying abilities, he is an excellent lineout option and I think the combination will complement each other. On the bench we have a young and exciting player in Jean-Luc du Preez whom I sure will make a big impact.”

Coetzee predicts a massive forward battle: “The set-piece will always be very important against any European side. However, our set piece was one of the positives in 2016 and I believe we will build on that. We prepared well and are looking forward to Saturday.”

Mtawarira will extend his record as the most-capped Springbok prop to 87 appearances. He is the third-most experienced Springbok forward with only Victor Matfield and John Smit having played more Test matches for the Boks. It will be his 25th successive Test for the Boks, which equals the record held by Ollie le Roux between 1998 and 1999.

Apart from Vermeulen (shoulder injury), De Allende (quad contusion) and Mapoe, several other candidates such as Pat Lambie, Handre Pollard, Francois Louw, Roelof Smit, Marcell Coetzee and Rohan Janse van Rensburg were all not considered due to various injuries.
out
The total number of Test caps for the Springbok starting line-up is 265.

There are 54 caps in the backline and 211 among the forwards, while the total on the bench is 151 caps.