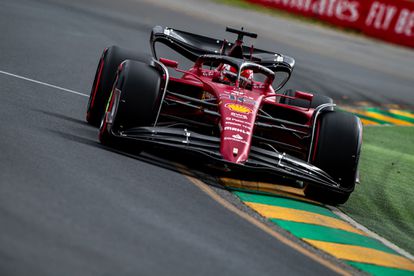 Sergio Perez topped the times for Red Bull in Saturday’s third and final practice for the Monaco Grand Prix, narrowly outpacing home hero Charles Leclerc of Ferrari in the final seconds of an intense sunlit session.

Driving with great precision and elan, the Mexican driver clocked a best lap in one minute and 12.476 seconds to outpace his Monegasque rival by 0.041, with Carlos Sainz third in the second Ferrari, three-tenths adift.

World champion and series leader Max Verstappen was a very close fourth in his Red Bull, nearly four-tenths ahead of Pierre Gasly who was a bold fifth for Alpha Tauri.

Perez’s success, completed with a series of excellent laps, ended Leclerc’s domination of practice at his home event where on Sunday he hopes to banish a ‘curse’ and finish the race for the first time.

Lando Norris was sixth for McLaren ahead of seven-time champion Lewis Hamilton, still struggling in his capricious Mercedes, Kevin Magnussen of Haas, and George Russell, in the second Mercedes. Fernando Alonso was 10th for Alpine.

The session was uninterrupted, but run in excellent conditions with several minor incidents as the teams competed fiercely for track time and space.

On another near-perfect and warm Riviera morning, under blue skies, Nicholas Latifi and Kevin Magnussen led the way for Williams and Haas, but it was Fernando Alonso who set the first significant time in 1:14.757 for Alpine.

The Ferraris took their time, but were immediately on top when they began lapping, Leclerc and Sainz heading the Red Bull pair after 15 minutes as Mercedes delayed joining the fray. When they did, after 20 minutes, it was without much impact.

Verstappen improved to second splitting the Ferraris before Perez went top in 1:13.297, matched immediately by Leclerc who then clocked 1:12.885. It was clear the top four were in a class of their own while Mercedes continued scrambling for an effective set-up.

With 25 minutes remaining, Russell was eighth and Hamilton 11th, both struggling to stay with the Alpha Tauris and McLaren’s Lando Norris, who defied lingering tonsilitis symptoms and went third behind Leclerc and Perez.

It was furiously competitive, if only a practice session, as the drivers demonstrated extraordinary skills in such heavy vehicles on the bumpy, sinuous and unforgiving street circuit.

It was a message typical at Monaco, a unique event that may be under threat if negotiations for a contract extension are not resolved – F1’s commercial rights holders Liberty Media seeking higher fees and improved facilities to enhance the racing.

Verstappen improved and went second with 12 minutes to go, but still three-tenths adrift of Leclerc as, in heavy traffic, tempers began to fray as incidents of alleged impeding multiplied.

In one frantic spell, the stewards noted one between Sainz and Vettel and initiated an investigation into another between Alfa Romeo’s Zhou Guanyu and Verstappen while Stroll clipped a wall at the Swimming Pool complex before Russell almost crashed into Perez.

The Mexican was unperturbed and went top in the closing minutes, resisting a faster lap by Leclerc to improve again in 1:12.517. It was a lap to challenge his rivals ahead of qualifying later Saturday.