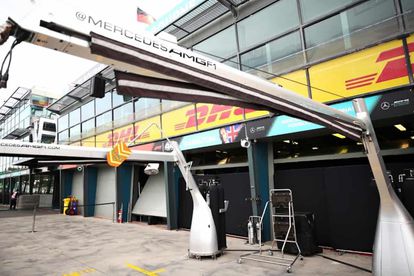 Formula 1 has announced an early summer break, voting for the teams to take their August holiday now in order to free up space later in the year when, or if, the 2020 season goes ahead.

Formula 1 called a halt on the 2020 season hours before the Australian GP was scheduled to begin, taking the decision after a McLaren team member tested positive for coronavirus.

With many teams self-isolating after returning from Melbourne where the Australian GP didn’t take place, Formula 1 bosses have decided to use the opportunity to take an early break.

Liberty Media and the FIA held an e-meet with the 10 team bosses on Wednesday, voting on the matter and declaring it so.

As such Formula 1 is now on a holiday with teams open to choosing any three-week period between now and the end of April.

The summer break, although perhaps best to say the coronavirus-enduced break, has also been extended from 14 to 21 days in which not a single second of work can be carried out in the teams’ factories or windtunnels.

By bringing the break forward, Formula 1 has freed up August should be back racing by then.

An FIA statement read: “In light of the global impact of the COVID-19 coronavirus currently affecting the organisation of FIA Formula One World Championship events, the World Motor Sport Council has approved a change to the 2020 FIA Formula 1 Sporting Regulations, moving the summer shutdown period from July and August to March and April and extending it from 14 to 21 days.

“All competitors must therefore observe a shutdown period of 21 consecutive days during the months of March and/or April.

“The change was supported unanimously by both the F1 Strategy Group and F1 Commission.”

Ferrari was reportedly behind the move to bring the summer break forward, probably because the Scuderia has been one of the teams hardest hit by the coronavirus outbreak.

Earlier this week the Italian company announced that it had shutdown all factories for a two-week period as northern Italy went into lockdown.

Ferrari faced the prospect of falling behind its rival teams in developing its 2021 car as others, including main protagonists Mercedes and Red Bull, were still open for business.

Ferrari has welcomed the early break, confirming it will take it immediately.

“Scuderia Ferrari Mission Winnow, whose staff, along with millions of people in Italy and around the world, is having to deal with the Covid-19 virus pandemic, fully supports the FIA and Formula 1’s decision to bring forward the usual summer shutdown,” read the statement.

“Scuderia Ferrari will therefore be shut as from tomorrow, Thursday 19 March, up to Thursday 8 April inclusive.

“The priority for the team has always been the safety of its employees and their families, which is why, for several days now work in the Maranello facility has been suspended, replaced where possible by a smart working system.

“We are just as disappointed as our fans that we cannot be racing, as we have done for over 70 years, but when confronted by a situation as serious as this one, it is vital that we follow the advice of the authorities and limit all activities as much as possible in order to contain the virus as efficiently as possible.

“We will wait for the situation to improve so that we can return to normality, in our daily lives as well as in sport, including motor racing. In the meantime, our thoughts are with everyone affected by the virus and those working on the front line to combat it.

“Maintaining our distance, but still united, this virus can be defeated.”

Next up for discussion is the potential schedule for a 2020 calendar with some reports claiming it will start in Monaco and others saying Baku will be the first race.

Formula 1 bosses will again e-meet with the teams in the coming days to put together a possible calendar.

F1 rules state that a minimum of eight races must be held for a World Championship.

However, according to Auto Motor und Sport, bosses are hoping to get in 18 races over the course of just 182 days. That’s one race every 10 days!

F1 sporting boss Ross Brawn has already said he is open to trialling “two-day weekends” to allow for triple-headers to make the most of whatever months remain.

All 10 teams, though, must agree to any changes as F1’s regulations state the calendar must be locked in on January 1st or else unanimous agreement is required.

According to Gazzetta dello Sport, Liberty Media will “video conference” with the F1 team bosses this Thursday to discuss the calendar.

The publication claims that ‘the proposal that will be made will be to try starting from Monte Carlo (24 May) or at the latest from Baku (7 June).

‘The schedule will remain almost unchanged until Brazil with Monza on 6 September.

‘The teams will discuss whether to shorten or even cancel the summer break to enter the Netherlands, most popular date on August 23, a week before Spa, but the concern is that running Zandvoort and Spa just seven days apart could damage the turnout for both.

‘The alternative is to run in August 16th but at this point there would be only two weeks from Hungary.

But the coronavirus will have the final say on that.

In his own words: Kolisi explains decision to join French club