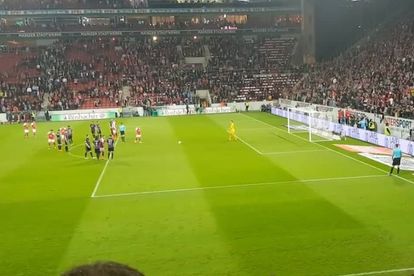 Football’s Video Assistant Referee (VAR) has been on trial since 2016 at both club and international level and will be employed at next month’s World Cup in Russia.

But some critics are calling for it to be dropped from the showpiece tournament after a string of controversial incidents.

In a Mainz v Freiburg Bundesliga match last month, the hosts had a penalty appeal for handball waved away in first-half stoppage time by referee Guido Winkmann, who blew for half-time and the players headed for the changing rooms.

But Winkmann was advised by the VAR to take another look and after five minutes he reversed his decision, meaning both teams had to be dragged back onto the field. The penalty was scored and the players then headed straight back off again for half-time.

A catalogue of incidents during an FA Cup replay on a bitterly cold February night was a big factor in the English Premier League opting to go without VAR next season. Tottenham welcomed minnows Rochdale to Wembley and saw what looked a perfectly good Erik Lamela goal disallowed by the VAR, Graham Scott, who was watching in a studio some 20 kilometres (12 miles) away.

He then refused a penalty when Lucas Moura was felled in the box, but awarded one after the referee had given a free-kick outside the area when Kieran Trippier was fouled. Son Heung-min struck the spot-kick home but the VAR then disallowed the goal for a stuttering run-up, with the coup de grace being the South Korean’s subsequent yellow card for an “illegal feint”.

All the incidents took time to resolve with players and spectators left shivering in a sub-zero blizzard during an opening period that lasted the best part of 52 minutes.

“The first half was a bit embarrassing for everyone,” said Tottenham manager Mauricio Pochettino, after his side ran out 6-1 winners.

A Primeira Liga match in Portugal descended into farce when a giant flag obscured the view of a camera, allowing an offside goal to stand. Aves beat Boavista 3-0, with their third goal scored by a clearly offside Vitor Gomes from a 70th-minute free-kick.

There was no linesman’s flag but when the referee asked the VAR to check, another flag proved crucial. A Boavista fan in the away end had waved his flag at exactly the wrong moment, blocking the camera’s view. With no evidence to rule out the goal, the referee had to let it stand.

Guidelines say the VAR should only intervene if the on-field referee has missed an obvious infringement. But an incident in March, when England were leading Italy 1-0 in a friendly, prompted much debate over what constitutes a “clear error”.

Federico Chiesa went down in the box in the 87th minute but referee Deniz Aytekin said no foul – until the VAR suggested he look again. The ref then deemed James Tarkowski had made very slight contact, but it certainly hadn’t been obvious when seen at full speed. When Italy scored and secured a 1-1 draw, Gareth Southgate was not happy.

“I prefer that the referee’s decision is final,” the England manager scowled.

Hawk-Eye apologised for using a wobbly line on a graphic to show Manchester United’s Juan Mata was offside. The company said the decision, which ruled out a goal in United’s 2-0 FA Cup win over Huddersfield Town in February, was correctly made using a straight line — but that an “incorrect graphic” was issued for broadcast on TV.

“This was a case of the wrong image being provided to the broadcaster and we apologise,” a Hawk-Eye tweet said, after the wonky yellow line prompted howls of protests by viewers.