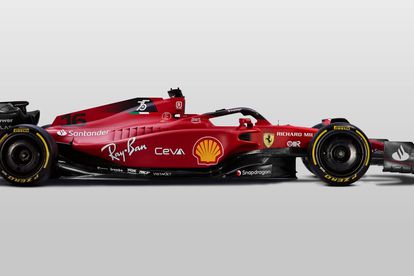 Ferrari have unveiled their new F1-75 car which they hope can challenge Mercedes and Red Bull for the Formula One world title this year. Photo: Twitter @ScuderiaFerrari

Ferrari have unveiled their new F1-75 car which they hope can challenge Mercedes and Red Bull for the Formula One world title this year. Photo: Twitter @ScuderiaFerrari

Charles Leclerc said “expectations are very high” as Ferrari on Thursday unveiled their new F1-75 car which they hope can challenge Mercedes and Red Bull for the Formula One world title this year.

Ferrari have not won the constructors’ title in 14 years, with the Scuderia finishing third last season and sixth in 2020.

The most successful Formula One team won the last of their record 16 constructors’ titles in 2008, with Finland’s Kimi Raikkonen lifting the last drivers’ title for the Prancing Horse in 2007.

Their last race victory came with former driver Sebastian Vettel, who led a Ferrari one-two ahead of Leclerc at the Singapore Grand Prix in 2019.

Monaco’s Leclerc and Spaniard Carlos Sainz will continue their quest to break Mercedes and Red Bull’s domination next season.

“Expectations are very high because we are Ferrari and we are always expected to win,” said Leclerc.

“But we will only know once we’re on the track.”

Revealed at Maranello, the F1-75 takes its name from an important anniversary for the team, 75 years since founder Enzo Ferrari produced his first Ferrari car.

This season’s Ferrari is darker red in colour

The car features a darker red and black livery, a throwback to the Scuderia’s oldest cars, combined with the innovative design of the new F1 machines.

But the F1-75 has a different profile from its predecessor to comply with the new regulations coming into force this season, which many people expect to make the grid more competitive.

The latter favours the ground effect, or suction, rather than aerodynamic support in order to allow F1 cars to overtake more easily in the race, with the cars featuring larger wheels.

The new Ferrari also features a two-piece nose with the wing attached to the lower one, which should give engineers a greater range of settings to suit the characteristics of different circuits.

Red Bull has already presented a preliminary version of its F1 2022 car and Mercedes is due to present its own on Friday.

The first pre-season tests are scheduled in Barcelona from February 23-25 and the first race will take place in Bahrain on March 20.