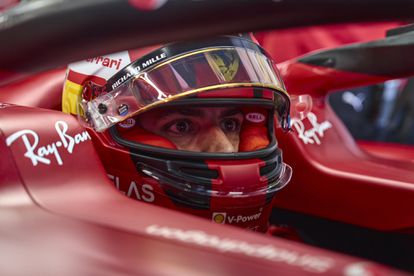 Carlos Sainz topped the times ahead of team-mate Charles Leclerc as Ferrari delivered a one-two in Practice 1 at the Belgian Grand Prix. Photo: Twitter @ScuderiaFerrari

Carlos Sainz topped the times ahead of team-mate Charles Leclerc as Ferrari delivered a one-two in Practice 1 at the Belgian Grand Prix. Photo: Twitter @ScuderiaFerrari

Carlos Sainz topped the times ahead of team-mate Charles Leclerc as Ferrari delivered a resounding one-two ahead of Red Bull’s world champion and series leader Max Verstappen in Friday’s opening practice at the Belgian Grand Prix.

The Spaniard clocked a best lap in one minute and 46.538 seconds to outpace his Monegasque partner by nearly a tenth of a second.

Verstappen, who leads the title race by 80 points, was adrift by 1.2 seconds in an intriguing session run in dry conditions until a late downpour.

George Russell was fourth for Mercedes in 1:47.396 ahead of Aston Martin’s Lance Stroll, Alex Albon of Williams and a revived Daniel Ricciardo who was seventh for McLaren, two days after announcing his early exit from the team later this year.

Yuki Tsunoda was eighth for Alpha Tauri ahead of seven-time champion Lewis Hamilton in the second Mercedes and Sergio Perez, who was 10th in the second Red Bull.

The session began in dry, but overcast conditions following major news in the morning when Audi confirmed their entry as an engine supplier from 2026, anticipated to be with Sauber.

They presently race as Alfa Romeo with a Ferrari engine – though the Italian sponsor announced also on Friday they would be terminating the partnership at the end of 2023.

After the ‘summer break’ the teams returned with upgrade packages, notably Mercedes and McLaren, as they eyed a continued upturn in results in the final part of the season.

Once the action began, it was soon clear the usual suspects would be leading the way with Sainz, Verstappen and Leclerc setting the early pace and swapping places on top of the timing monitors.

An electrical issue for Kevin Magnussen in his Haas led to a red flag after 37 minutes and delivered a 12-minute pause before heavy rain heralded the resumption of action for the final seven minutes.

The Belgian race marked not only the return of racing after the summer holidays, but also the introduction of a new set of controls to reduce the ‘porpoising’ that had plagued many teams in the first part of the season.

On top of all this both Verstappen and Leclerc are facing heavy grid penalties this weekend, along with Norris and Ocon, for taking new power unit parts for their cars.

Enhle Mbali exposed for ‘willing to be in a polygamous marriage’