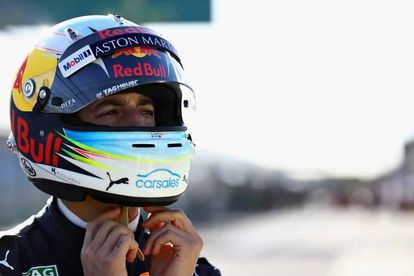 MELBOURNE, AUSTRALIA – MARCH 21: Daniel Ricciardo of Australia and Red Bull Racing puts his helmet on during previews ahead of the Australian Formula One Grand Prix at Albert Park on March 21, 2018 in Melbourne, Australia. (Photo by Mark Thompson/Getty Images)

MELBOURNE, AUSTRALIA – MARCH 21: Daniel Ricciardo of Australia and Red Bull Racing puts his helmet on during previews ahead of the Australian Formula One Grand Prix at Albert Park on March 21, 2018 in Melbourne, Australia. (Photo by Mark Thompson/Getty Images)

Daniel Ricciardo faces a pivotal year in his Formula One career with expectations of a much-improved Red Bull performance and mounting speculation over where he will drive next season.

The 28-year-old Australian, who embarks on his eighth F1 season under the suffocating pressure and hype of competing at a home Grand Prix in Sunday’s opener in Melbourne, endured a frustrating 2017 campaign.

He retired from three races with engine-related problems — including the misery of failing to finish in last year’s Melbourne race — and amassed 70-places-worth of grid penalties stemming from the unreliability of the team’s Renault engines.

But Ricciardo is considered a championship threat with Red Bull’s new RB14 car expected, along with Ferrari, to threaten the Lewis Hamilton-led Mercedes’ domination.

“It feels like we are in a better place than we have been the last few seasons,” he said ahead of the new season.

“We seem solid. Soon we’ll know on one-lap pace where we are, but I don’t think we are far off.”

Reliability will be crucial if they are to mount a serious challenge to Mercedes and Ferrari.

Red Bull had lifted four straight drivers’ and constructors’ world titles when the Australian was promoted from Toro Rosso in 2014, but have not claimed another since with Ricciardo winning five races for the senior team.

“We’re certainly relying on the reliability to improve, and we have made a pretty good step with that,” Ricciardo said. “I think we are obviously still not going to be on Mercedes’ level.

“But in any case, to win a championship you need to be finishing races, let alone winning, and once we can finish we can start taking points away and do our thing.”

Adding to the intoxicating mix is the threat from ambitious 20-year-old Dutch teammate Max Verstappen, who while outscored by Ricciardo on race points last year, regularly topped the Australian in qualifying.

Ricciardo said both of them desperately wanted to win.

“You need that in a way and it’s not being a bad sport, it’s not cheating; it’s just that ruthless streak that every winner has in them. I think Max and all the top guys in the sport have that in them.”

Ricciardo will become a free agent in 2019, raising speculation about where he will be next season given the contracts of Valtteri Bottas at Mercedes and Kimi Raikkonen at Ferrari are also due to expire at the end of the year.

“It’s nice to be in a position to plan my next two or three years to see what I want in the sport and where I plan on pitching it,” he said.

“It will be interesting, I will go through some conversations that will be new to me and I’m kind of looking forward to that experience.

Ricciardo is seeking to become the first home driver to win the Australian Grand Prix since it became part of the world championship calendar in 1985.

Alan Jones was the last to top the podium in his home grand prix, in 1980, a year when he also was the last Australian to win the Formula One world championship.

“Starting the F1 season in Australia means there is so much hype and so much build-up, now with me being the only Australian on the grid there is extra attention, extra questioning and expectation,” Ricciardo said.

“It’s a lot but it’s fun, it’s cool but it does mean I usually leave that weekend needing 48 hours of pure serenity and quietness.”