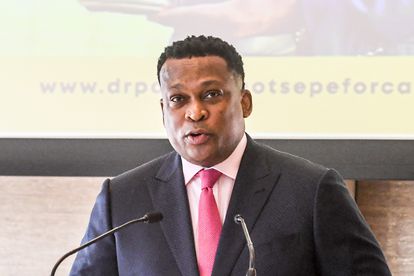 Former Kaizer Chiefs striker Fees Moloi is at the forefront of a planned shutdown for the return of Robert Marawa to the SABC.

Marawa was fired from the public broadcaster by a text message on 30 July 2021, and Moloi feels his dismissal was unfair.

Moloi further said the SABC had a personal vendetta against Marawa whom he vowed to fight for in order for him to be re-hired by the public broadcaster.

READ | KAIZER CHIEFS LATEST | THE ONE STAR WHO COULD GO TO THE FIFA WORLD CUP!

“I strongly feel that his dismissal was unfair. The SABC had a personal vendetta against him. For this reason, I shall fight for his reinstatement,” Moloi told Daily Sun.

Marawa, a veteran TV and radio sports anchor, was the host of the Marawa Sports Worldwide show on Metro FM and Radio 2000 between Monday and Friday.

Upon his departure in July, the SABC roped in Andile Ncube as Radio 2000 sports anchor while Thomas Mlambo stepped in for the similar show on Metro FM between Monday and Friday.

Asked for his comment on the planned shutdown by the same publication, Marawa reiterated that his dismissal had nothing to do with his work before wishing the SABC CEO and his team the best of luck.

“I’ve gone on the record to say the decision to get rid of me had nothing to do with my work, but was an external decision. I wish the CEO and cabal there the best,” said Marawa.

Orlando Pirates: FIVE players at risk of leaving for FREE

Etzebeth well on track to be most-capped Springbok of all-time!