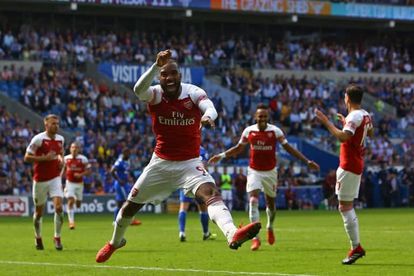 Arsenal resume Premier League life under boss Unai Emery with a trip to Newcastle on Saturday.

The Spaniard puts his side up against countryman Rafa Benitez, with neither completely satisfied with life at the moment.

Emery’s team did at least go into the international break off the back of a pair of EPL victories.

The Gunners came out on top of a five-goal thriller at promoted Cardiff a fortnight ago.

Alex Lacazette provided a moment of individual class late on in the Welsh capital, sneaking a win after a battling encounter with a near-post finish.

Shkodran Mustafi had earlier headed his side into an early lead against Neil Warnock’s Bluebirds.

But they were twice pegged back either side of Pierre-Emerick Aubameyang’s strike before the French cavalry arrived.

Lacazette’s goal hauled his team up to ninth in the early table, sneaking above rivals Manchester United on goal difference.

A 3-1 victory at home to London rivals West Ham the previous week had belatedly kick-started the Gunners’ season, after a brace of defeats to open the new campaign.

Newcastle’s story so far has been one of toil.

The Toon Army’s 2-1 defeat at reigning champions Manchester City in their most recent appointment doesn’t look too bad on paper.

But it left them with just a single point to show for their efforts this campaign – thanks to a goalless draw at promoted Cardiff.

The stalemate came in between further 2-1 losses to Chelsea and Tottenham in an admittedly difficult opening to the fixture list.

They would have much rather faced Arsenal a couple of games ago, but them’s the breaks in the English top flight.

Matt Ritchie and Jonjo Shelvey stand a chance of playing after returning to training following injury.

Jet-set duo Salomon Rondon and DeAndre Yedlin could be rested, however, after flying halfway around the world for international duty.

Alex Iwobi should return following a bout of illness.