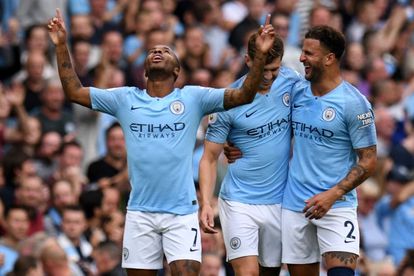 Manchester City renew their vigorous Premier League title defence when they take on Fulham at the Etihad Stadium.

The international break came with Pep Guardiola’s side two points off the top of the EPL table after a near-perfect start to the new campaign.

They had to be patient last time out against Newcastle.

Raheem Sterling’s early goal failed to open the floodgates against the Toon Army, who pulled level through DeAndre Yedlin.

City were indebted to a fine strike from Kyle Walker to seal the three points that keeps them hot on the heels of Liverpool and Chelsea at the top of the pile.

The previous week’s draw at Wolves remains their only blemish, following victories over Huddersfield and Arsenal to start the season.

Fulham seem set on enjoying their return to the big time.

A nervous flutter may have been rising for boss Slavisa Jokanovic and Co after defeats to London rivals Crystal Palace and Tottenham in their opening two games.

But an enterprising style has reaped more rewards since.

Goals from Andre Schurrle and Aleksandar Mitrovic catapulted them into a two-goal lead at Brighton last time out.

Wily old Glenn Murray, though, popped up with a brace – the second a penalty after Mitrovic’s handball – to seal a dramatic draw.

It was still a decent follow up to Fulham’s first win the previous week, a handsome 4-2 thumping of Burnley at Craven Cottage.

Now they face the daunting task of keeping that going in the champions’ back yard.

Raheem Sterling could feature despite slinking off from international commitments with a dodgy back.

Kevin De Bruyne and Claudio Bravo face plenty more time bothering the physio, while Danilo is back in training.

Tom Cairney and Neeskens Kebano are ruled out through injury, as is defender Tim Ream.