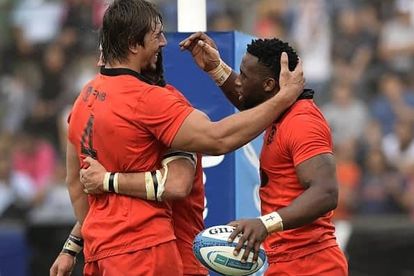 Siya Kolisi has a not-so-secret admirer in the Springbok camp in the form of teammate Eben Etzebeth.

Both 27, the pair go back a long way together, having been friends since they were in high school and, according to the Bok skipper, his decision to move to Cape Town was influenced, in part, by the prospect of reuniting with his pal.

Etzebeth deputised for Kolisi, who first captained the Stormers last year but, at national level, their roles were reversed as the bruising lock took over the reins from the injured Warren Whiteley before he himself broke down during the Boks’ last Test of the year, with the flanker leading the side for the bulk of the game.

Kolisi was handed the Bok captaincy on a more permanent basis by director of rugby Rassie Erasmus ahead of this year’s June internationals against England and retained the armband despite both Etzebeth and Whiteley returning to full fitness ahead of the Rugby Championship opener against Argentina in Durban.

Speaking to the media ahead of his return to action, the big tight forward shed some light on just how close he and his skipper are and wasn’t shy to declare his love for him.

“Everyone knows that Siya and I have a pretty good relationship. When he was announced captain, I phoned him, and he told me how he was feeling and how excited he was,” Etzebeth said.

“I’ve worked with Siya since U-18 and just to see him grow as a man and a leader in the past two years has been wonderful.

“Can I say I love another man? Because I really love the guy. It’s awesome for me to see him as captain, leading this team. I’ll be there to back him up all the way.”

Kolisi also shared his excitement of finally taking the field with his dear mate after he took no part in this year’s Super Rugby due to injury.

“I’m just excited that he’s back and he’s going to be playing tomorrow. I know how hard he’s worked and I saw how much it hurt him in June when he couldn’t be here.”

The clash between the Boks and the Pumas kicks off later this afternoon at 17:05. You can follow our live updates here.