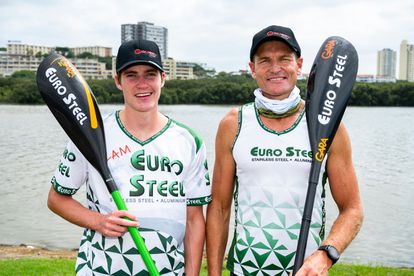 The Dusi Canoe Marathon got underway this morning from Pietermaritzburg and paddlers have begun making their way down the river.

Here we look at the top contenders to win the 2022 Dusi Canoe Marathon, contested as a K2 championship.

The MyLife Dusi Canoe Marathon’s modern day legend Andy Birkett teams up with the young and exciting David Evans for this year’s edition of the race. The pair will go into the race as the favourites given the fact that Birkett has won every K2 Dusi since 2010 – with five different partners.

Evans is an Under 18 and Under 23 champion at the Dusi and last year finished in third place overall proving that he has what it takes to fight it out with the senior professionals at the race. Despite a muted build-up they will go into the race as the crew to beat.

After winning the MyLife Dusi with Martin Dreyer in 2008, Thulani Mbanjwa could potentially break Andy Birkett’s run of K2 wins 14 years since he was in the last winning crew that didn’t include Birkett.

Mbanjwa and Mtolo have been in fine form through the build-up with a few wins and a handful of podium finishes under their belt. With Mtolo’s fifth place finish last year in the K1 year the pair are in the pound seats for a podium finish at Blue Lagoon on Saturday, if not a historic victory.

The 2014 champion Sbonelo Khwela has been arguably the most consistent MyLife Dusi paddler after Andy Birkett for the past thirteen years with ten podium finishes during that period and despite a tough 2021, he is back.

Khwela and Makhanya won the recent Campbell’s to Dusi Bridge race which signalled their intentions and after running under the radar they are in the spotlight as a crew that will definitely be mixing it up with the podium contenders.

A second place finish in 2021 proved that seasoned professional Hank McGregor was not finished with the MyLife Dusi and he returns in 2022 teamed up with Under 23 ace Matthew Millward. McGregor is a three-times champion of the race and Millward has been on the edge of the junior title.

The pair has had a strong build-up to this year’s race and will push hard for an already potentially packed podium when they arrive at Blue Lagoon on Saturday.

Despite probably not being the favourites at the 2022 MyLife Dusi Canoe Marathon, this duo will be right in the mix. A pair that has pedigree with three overall winners medals between them and numerous age group triumphs at the Dusi.

Solms signalled her comeback when she recently won the N3TC Drak Challenge and Haw has proven her durability on the water and on the portages which puts this pair well in contention for the top step of the podium on Saturday.

Arguably the favourites going into this year’s race, this pair that boasts an impressive MyLife Dusi pedigree with both paddlers champions of the race, Peek in 2018 with her sister Cana and Mackenzie the double defending K1 champion.

Having tasted victory at the race it’s going to be difficult to look past this pair as potential Dusi champions and given their prowess with the boat on their shoulder they might have the upper-hand through the portages and Peek’s river skills will need to be on point.

Following a quiet build-up to the 2022 MyLife Dusi this year it seems that Hartley and McGregor have found some rhythm and will be podium contenders for this year’s race.