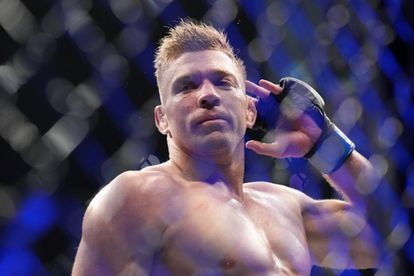 Du Plessis was due to fight Chris Curtis at the upcoming pay-per-view event at the VyStar Veterans Memorial Arena in Jacksonville, Florida.

However, Mike Heck of MMA Fighting reported that Curtis was forced to withdraw with a wrist injury.

That report has since been corroborated by ‘The Action Man’ himself who explained in an Instagram post what led to the injury.

“Last Thursday I was sparring, nothing crazy, everything normal,” said Curtis. “And I had that moment in the movies where a guy throws a punch and a guy throws a kick. Instead of clashing and cancelling out, his kick folded my wrist like a f**king cheap accordion. So, I go get an X-ray and I fractured my wrist. Saw a specialist yesterday morning and he’s like, ‘Oh, maybe four weeks of recovery’. I was hoping the UFC was like, ‘Hey, you can do it. See how you feel this week’ and the specialist was like, ‘No, man. You’re not fighting. I’m not clearing you. This is stupid.’ So, I’m not cleared to fight.”

With Curtis out, ‘Stillknocks’ was given a new opponent in Hernandez.

Dricus du Plessis is unbeaten in his UFC career

Du Plessis did not appear phased in the slightest at the late change in opponent when taking to Instagram following the news.

“New opponent same date and same outcome. No matter who they put in in front off me the outcome will be the same. Come 9 April I’m putting on a world class performance like I always do. I’m a Gladiator and whoever my victim is makes absolutely no difference to me,” he wrote.

Du Plessis joined the UFC over a year ago following stints under KSW and EFC banners. The 28-year-old has earned finishes in both Octagon appearances, knocking out Markus Perez and Trevin Giles at UFC Fight Island 5 and UFC 264, respectively.

Hernandez rebounded from a loss to Kevin Holland with a second-round submission over Rodolfo Vieira at UFC 258 this past February. The Contender Series alum is now 2-2 in the UFC.

Leading South African bookmakers Hollywoodbets have installed Du Plessis as a 5/10 favourite, with Hernandez on offer at 14/10.

UFC 273 is headlined by a featherweight championship clash between Alexander Volkanovski and Chan Sung Jung, better known as ‘The Korean Zombie’.