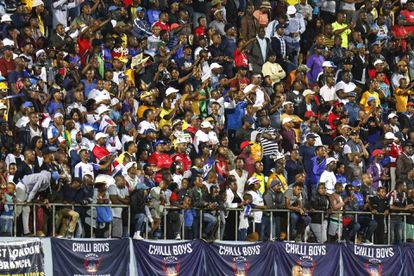 The Deputy President of the Republic of South David Mabuza has issued an update on what it will take for fans to be allowed back in stadiums.

It has now been over a year since fans entered stadiums across the country to access any sport, and Mabuza has since indicated how that picture can change.

Mabuza, in his capacity as Chairperson of the Inter-Ministerial Committee on Covid-19 Vaccines has urged the South African public to hurry up and get vaccinated. The Deputy President has also launched the national vaccination social mobilisation campaign which he leads, in an effort to speed up the vaccination process and the subsequent return to normality in the country.

It is thought that, the sooner the majority of the country is fully vaccinated against Covid-19, the better its prospects of seeing stadiums filled with supporters again. Mabuza is not alone on this project hoping to ensure the return of fans, and according to a poster from the Presidency of South Africa official Twitter account, is also joined by Sports, Arts and Culture Minister Nathi Mthethwa and the Minister of Health Dr Joe Phaahla.

The slogan for this campaign that seeks to quickly facilitate the return of fans to stadiums throughout the various sporting codes is “ RETURN TO THEATRE, CONCERTS, STADIUMS- IT’S IN YOUR HANDS” it reads on the poster. It also has it’s on hashtag #ReturnToPlay.

The Mabuza-led campaign is set to host its social mobilisation at the FNB Stadium on Wednesday. The government are not alone in this initiative and have also enlisted the services of a few popular names. The names include Miss South Africa Shudufadzo Musida and the likes of actors and musicians such as Nomcebo Zikode, Khuzani Mpungose, Sjava and others.

READ | SARU ANNOUNCE FAN ORIENTATED “ALL-STAR” CHAMPIONS MATCH, HERE IS HOW YOU CAN GET INVOLVED!

Mabuza also took to his official Twitter account earlier this morning to post a picture of the FNB Stadium without fans and the caption “This stadium can be full of spectators again, if we choose to vaccinate against the #Coronavirus. #ChooseVaccination #VaccinesSaveLive.