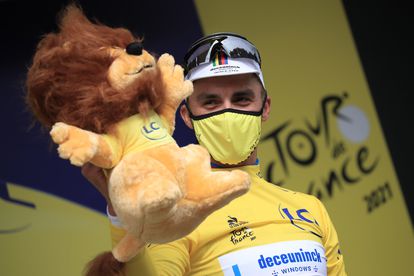 The 22 teams at the 2022 Tour de France aren’t necessarily in it for the prize money, but it’s a nice bonus for doing well at the race. Photo: EPA/Christophe Petit-Tesson / POOL

The 22 teams at the 2022 Tour de France aren’t necessarily in it for the prize money, but it’s a nice bonus for doing well at the race. Photo: EPA/Christophe Petit-Tesson / POOL

The 22 teams at the 2022 Tour de France aren’t necessarily in it for the prize money, but it’s a nice bonus for doing well at the iconic race.

According to the VeloNews website, this year’s race sees a total money pot of €2 288 450 ($2.4 million / R38 million) being split between the various classification winners, stage victors, team prizes, intermediate sprints, and the rider who crosses the Tour de France’s highest peak first.

Of course, the final winner of the yellow jersey will pocket the biggest amount of prize money with a tidy €500 000 (R8.3 million) for taking the famed jersey into Paris.

If you’re not in the general classification contention (GC), finishing the race will earn a rider €1 000 (R16 690) in prize money.

In total, nearly half of the overall prize pot is given away for GC positions at the end of the race.

READ | DARYL IMPEY GETS THE NOD FOR 2022 TOUR DE FRANCE

The winners of the points (green) and mountains (polka dot) competitions will both at €25 000 (R417 000) to the team coffers with money awarded down to eighth place.

Of the four jersey classifications, the young rider (white) competition earns its winner the least with €20 000 (R334 000) with money paid to the top four finishers.

There are daily monetary prizes on offer for various things.

The biggest daily financial outlay is for the stage winner. Securing a stage victory is a great moment for any rider but it will also net the team a tidy €11 000 (R184 000) for the pot.

Racing for a minor placing might still be worth it as, on top of the UCI points, there’s a small amount of cash for finishers up to 20th on each stage.

Getting over a classified climb first can net somewhere between €800 (R13 350) and €200 (R3 337) depending on the severity of the climb with hors categorie ascents offering up the most money.

Also a Tour de France prize for most combative rider

This year, it is the Col du Galibier that has that honour. While it is crossed twice during this year’s race it is the ascent on Stage 11 that is offering up the funds.

Classification leaders during the race will add a small amount for every day that they spend at the top of the respective standings.

At the end of the race, whatever money has been accrued by the team will be spread out among everybody, including staff members.

Depending on how much has been accrued, the prize split could be enough to pay for a nice vacation – or just enough for a slice of pizza!