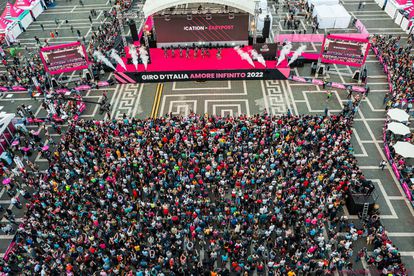 A broad cast of pretenders to the Giro d’Italia winner’s pink jersey have gathered in Budapest from where the race embarks on Friday, 6 May. Photo: Twitter @giroditalia

A broad cast of pretenders to the Giro d’Italia winner’s pink jersey have gathered in Budapest from where the race embarks on Friday, 6 May. Photo: Twitter @giroditalia

A broad cast of pretenders to the Giro d’Italia winner’s pink jersey have gathered in Budapest from where the race embarks on Friday, 6 May for 21 days of action ending in a Verona time trial.

Below, a look at FIVE of the men in the running for the 105th edition that covers Italy’s peaks and plains after three days in Hungary:

Is the Giro d’Italia favourite in the Ineos camp?

Tactically brilliant and ruthless Ineos are targeting a third straight pink jersey with their best fit rider Richard Carapaz. The 2019 Giro champion will be easily recognisable by his gold helmet and gold-braided uniform in honour of his Olympic gold from the iconic Mount Fuji race where he beat Wout van Aert and Tadej Pogacar.

The man who suffered a meltdown on the 2018 Giro after spending 13 stages in pink, British climber Simon Yates bounced back to win the Vuelta a Espana that year and ended the year ranked world number one. Now 29, he has raced the past four Giros, all with Matt White’s Bike Exchange, coming third last year, and was also second at Paris-Nice this spring.

Joao Almeida led the Giro for 15 days as a rookie in 2020 and returns here as the leader of Team UAE Emirates with plenty of back-up. The 23-year-old Portuguese has an advantage in the time trials and has the kind of independence of spirit needed to go it alone in the mountains.

“I have the two most beautiful jerseys in the world,” Tom Dumoulin said after adding the Giro d’Italia to his world champion rainbow jersey in 2017. The world was at Dumoulin’s feet before he decided to “get off the train” and take a breather shortly after joining Jumbo in 2020. The Dutchman was runner-up at the Olympics in his time-trial speciality, and has always professed his motivation to win the Giro again.

French nearly man Romain Bardet has raced 11 Grand Tours and says he should have both the will to win and enough energy in the tank in the final week to make it count this time. Bardet has been runner-up on the Tour de France and at the world championships, and few would be surprised if he made the great leap forwards in 2022.