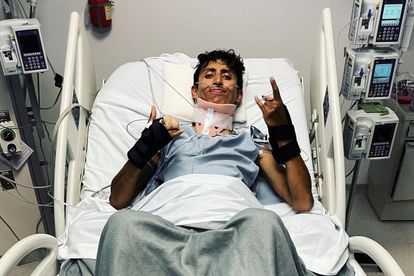 Colombia’s Egan Bernal has confirmed he would not participate in any of the three Grands Tours as he recuperates fully from an accident. Photo: Social media

Colombia’s Egan Bernal has confirmed he would not participate in any of the three Grands Tours as he recuperates fully from an accident. Photo: Social media

Last month, Bernal was said to be “conscious” and “stable” in hospital following a training accident near his home town in Colombia.

Pictures shared on social media showed the 25-year-old Giro d’Italia champion lying on the ground surrounded by teammates after colliding with a bus.

The terrifying accident result in Bernal requiring seven surgeries, the latest one taking place on his cervical vertebrae, while he previously confirmed that he had been given a 95 percent chance of being paraplegic in the immediate aftermath of the incident.

Updating his social media followers, Bernal wrote that he suffered “almost 20 broken bones”, while both his lungs collapsed.

He listed his breaks as 11 ribs, one femur, a kneecap, T5 and T6 vertebrae, C2 vertebrae, a metacarpal, and one broken thumb.

The reigning Giro d’Italia winner added: “I almost killed myself, but do you know what? I am grateful to God for putting me through this test.

“This is the toughest race, but I have had a group of excellent people around me.

“Yesterday I had my last major surgery and everything seems to have gone well.

“So now to recovery and to doing it again. I’m back!! And let’s rock.”

Bernal became an instant star in 2019 when he upstaged British team-mate and then champion Geraint Thomas to win the Tour – cycling’s most prestigious prize.

Bernal would enjoyed a stellar season, also winning the Paris-Nice and Tour de Suisse races. He recently signed a contract extension with British team Ineos until 2026 and was set to return to the Tour in July.