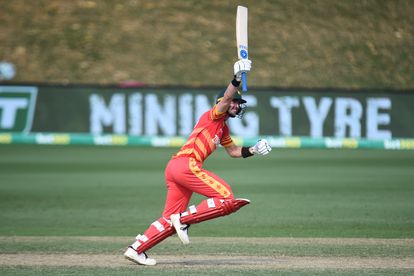 Brad Evans of Zimbabwe hits the winning runs during the Third One Day International (ODI) cricket match between Australia and Zimbabwe as part of the 2022 Men’s ODI Series at Riverway Stadium in Townsville, Australia, 03 September 2022. Photo: EPA/SCOTT RADFORD-CHISHOLM

Brad Evans of Zimbabwe hits the winning runs during the Third One Day International (ODI) cricket match between Australia and Zimbabwe as part of the 2022 Men’s ODI Series at Riverway Stadium in Townsville, Australia, 03 September 2022. Photo: EPA/SCOTT RADFORD-CHISHOLM

Houghton saw his side claim victory and some Cricket World Cup Super League points in what would normally have been a dead rubber.

The former skipper and coach was over the moon that Zimbabwe have finally beaten Australia in Australia.

Zimbabwe coach over the moon

“We don’t get to beat the big sides that often and to beat them in their country is a huge plus for us and our cricket at the moment.”

The coach added that he hopes this result will spur this improving Chevrons team to new heights.

“I hope it goes a lot way towards providing that [more games],” Houghton said.

“There’s a bit of good cricket coming up for us over the next six months, but it would be nice to get involved in tours to the bigger countries. The more wins we can get on tours like this, the more our chances are that we might get some bigger opponents on a regular basis.”

Houghton celebrated the win but also tempered that with realism as he acknowledged the roll the toss played in the result as Zimbabwe shot out the hosts for 141 with Ryan Burl taking a brilliant 5 for 10.

“I still think the gulf is huge,” Houghton said. “I’ll be honest, if we’d lost the toss today I think we’d have seen a game similar to the second game when you are looking at it from a completely different angle. We’d struggle to beat your state sides on a good day.

“We are growing and hopefully we grow quite quickly with the amount of cricket we are beginning to get and the fact we are getting a few results like this…it’s really good in enforcing what we are trying to do with the team, the tactics and the skills they have. Because there’s nothing worse than working really hard at something and getting absolutely no reward. It’s nice to get these little reward top-ups to show the guys what they are doing is right.”