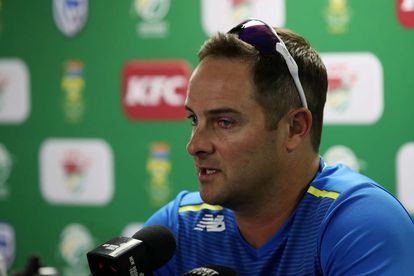 Proteas legend and current coach Mark Boucher faces an anxious next couple of months with a disciplinary hearing hanging over his head. Photo: Muzi Ntombela/BackpagePix

Proteas legend and current coach Mark Boucher faces an anxious next couple of months with a disciplinary hearing hanging over his head. Photo: Muzi Ntombela/BackpagePix

Proteas legend and current national coach Mark Boucher faces an anxious next couple of months with a disciplinary hearing hanging over his head.

Boucher and his Proteas team are preparing to head to New Zealand for a two-Test series followed by a visit by Bangladesh to Mzansi.

Shortly thereafter – from 16-20 May – Boucher’s hot-shot legal team will attempt to prove his innocence at a disciplinary hearing brought by his current employers Cricket South Africa (CSA).

Boucher faces charges of racism, among other charges, laid by CSA which could result in his dismissal.

But more about that at a later date.

How well do YOU know Mark Boucher?

Below, 10 facts you should read to impress your mates around the braai this weekend.

1. Mark Verdon Boucher was born on 3 December 1976 in East London

2. He made his Test debut in October 1997 against Pakistan in Sheikhupura and played his final Test for South Africa in Wellington in March 2012 against New Zealand

3. Boucher played a total of 147 Tests for the Proteas and holds the record for the most dismissals by a wicketkeeper with 532 catches and 23 stumpings

7. In all three formats of the game, Boucher scored a total of 10 468 runs and took 953 catches and made 46 stumpings for a record total of 999 dismissals

8. Boucher suffered a serious eye injury on 9 July 2012 after he was struck in his left eye by a bail after Imran Tahir bowled Somerset’s Gemaal Hussain. He announced his retirement the following day

9. He turned to coaching and was named Titans coach in August 2016. He was then appointed Proteas coach in December 2019 on a four-year deal culminating at the conclusion of the 2023 Cricket World Cup