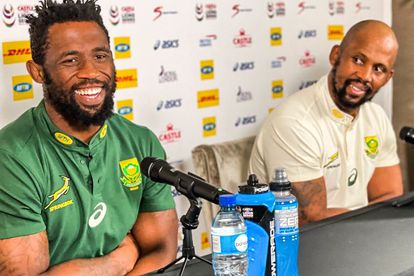 Former Springbok skipper John Smit will be looking to Siya Kolisi to play another “captain’s innings” in the decisive third Test against the British & Irish Lions. Photo: SA Rugby website

Former Springbok skipper John Smit will be looking to Siya Kolisi to play another “captain’s innings” in the decisive third Test against the British & Irish Lions. Photo: SA Rugby website

Bavuma posted a video of Kolisi having a bat but did not seem to be impressed by the World Cup winner at all.

Kolisi, who is currently out in Australia, where the Springboks prepare to face a rampant New Zealand side in little-known Townsville, has seemingly been enjoying his time off the training pitch.  Despite losing two test back to back against the Wallabies, it doesn’t seem like the skipper’s spirits have been dampened at all as seen in the video posted by Bavuma.

The video seems to show Kolisi showing off his batting skills (or…well maybe lack thereof if Bavuma’s advise is to be taken into account) but with almost every swing and a miss at the ball, the Springbok captain seems to be showing people exactly why he fell in love with the oval ball instead.

With Kolisi failing to convince Bavuma of his batting prowess, the Proteas captain had a few words for his fellow skipper, even telling him who’s batting advise he should be ignoring if he is to improve his stroke playing any time soon.

“Leader, forget those batting tips from

, sukum’mamela!  All the best for the clash against New Zealand

Proteas and Springboks having contrasting fortunes

Bavuma and Kolisi’s respective national teams have been experiencing different fortunates of late. Although Bavuma had to leave his charges in Sri Lanka due to a hand injury, the Proteas have recently looked like they have found their mojo again after a T20 series victory over their hosts. The Springboks on the other hand have lost two in a row against Australia and will be hoping for a change in fortunes against the All Blacks this Saturday.

What do you think of Kolisi’s technique? Was Bavuma right? Watch the video below: